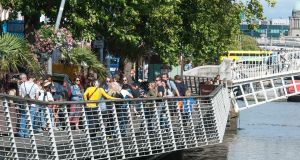 The Liffey boardwalk in Dublin has problems, but anti-social behaviour and illegal activities can be countered by effective policing. Photograph: Dave Meehan

If you fail to value and protect a public amenity, it will be abused. That is the basic message in reports concerning the Liffey boardwalk and the anti-social behaviour that goes on there. The answer does not lie in closing this very attractive facility or removing drug treatment centres from the city centre, as some have suggested, in order simply to move the problem out of sight. But if people who use this valuable public space are not to be intimidated or vulnerable to thieves, it will require regular, uniformed police patrols, instead of – or in addition to – existing plainclothes activity. At the very least, it will cut down on drug dealing.

Dublin is not a dangerous city. It is, however, experiencing a serious homeless problem that has been exacerbated by alcohol and drug addictions. Some of those affected behave badly. Others find their way to the boardwalk where, on a fine day, they can sit in the sun and meet with friends. Regular Garda patrols should ensure acceptable levels of behaviour and provide necessary reassurance for tourists. Public signage prompting visitors to be vigilant and not to leave personal possessions unattended would also help. It doesn’t stop there.

Dublin will welcome the largest-ever number of tourists this year but there is not a single street toilet in the city centre. Over decades, the city council closed Victorian-style facilities on the grounds of health and safety but failed to replace them. The situation finds no parallel in any other European city and has to be addressed, not just for the sake of visitors but for residents as well.

“As Dublin changes and expands, it is all the more vital that the very heart of the city would be a place that is visually appealing with a friendly, relaxed atmosphere that all can enjoy,” the late Fianna Fáil politician Seamus Brennan said when opening the boardwalk in 2000. The amenity has fallen short of those expectations, but it is visually appealing and adds to the public’s enjoyment of the Liffey.

Anti-social behaviour and illegal activities can be countered by effective policing. Without it, the situation may get worse.

4 The future of Covid-19 in Ireland: Best-case, worst-case and even-worse-case scenarios