An Taoiseach Micheál Martin has confirmed that Ireland will remain under Level 5 restrictions until April 5th, although a phased reopening of schools is planned from March 1st. Video: RTÉ 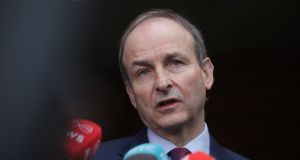 Micheál Martin. The Government seems too preoccupied with surveying how restrictions impact our behaviour while still refusing to offer us a coherent route out of lockdown. Photograph: Gareth Chaney/ Collins Photos Dublin

Taoiseach Micheál Martin wisely avoided poetry during the week when speaking about our current plight; we’ve had enough of the verse. But he did opt for the default option when poetry is exhausted by hailing our supposed reservoirs of endurance; we have shown, he declared, “what a remarkably resilient people we are”.

We’re not. Look around and through us and we’re far from springy. Gardaí received 43,000 calls to respond to domestic abuse incidents in 2020, an increase of 16 per cent on the previous year.

A peer-reviewed study carried out between March and June 2020 revealed significant increases in depression, anxiety and stress compared to pre Covid-19 days, while a survey of 195 psychiatrists by the College of Psychiatrists of Ireland in May and June last year found that the majority reported increased referrals for generalised anxiety (79 per cent reported an increase), health anxiety (72 per cent), depression (57 per cent) and panic (54 per cent).

None of these findings are surprising and the trends and reactions they reveal are not at all exclusive to Ireland, but collectively, they do highlight the hollowness of the assertion that we are somehow exceptionally resourceful in coping with lockdown. We don’t need to update MOPE (Most Oppressed People Ever) with MRPE (Most Resilient People Ever).

We have been inundated with behavioural instructions, analysis and surveys. Big SAM, apparently, is our new friend and protector. Last week Liz Canavan, assistant secretary of the Department of the Taoiseach said that SAM (the Social Activity Measure) will influence any plans to reopen the country.

SAM is an anonymous online survey collecting data from people about their recent activities and contacts, and the Taoiseach has hailed its benefits as it will apparently help us understand “more fully how restrictions affect our behaviour . . .ensuring that data and insight is the foundation of all of our policy decisions and communications approaches”.

But maybe SAM is also an irritating sideshow which distracts from the failure to robustly address holes in the Government’s response to Covid-19. Is it not ridiculous, after three waves of the virus, that this week an Irish system of quarantine for incoming travellers was still being debated?

And when it does become operational it will be applied so selectively it will surely make a mockery of the praise heaped on us for our sacrifices and progress. And what of the concerns about an effective testing and tracing system?

In a recent interview the Taoiseach tentatively engaged with this issue as if it were some new important discovery: “We need to make sure . . .that it’s a significant weapon in keeping the numbers down once we get them down to low levels”. In any case, what are “low levels” and what do they mean in relation to his Government’s possible return to governing?

The Government seems too preoccupied with surveying how restrictions impact our behaviour (as if we don’t already know) while still refusing to offer us a coherent route out of lockdown.

Neither has it given a serious, considered response to expert epidemiologists who are advocating a zero-Covid-19 policy and continuously highlighting the obvious unsustainability of a “living with Covid-19” strategy. Trying something different would surely be a mark of courage rather than despair.

When the history of the response to the pandemic in Ireland is written it should acknowledge the scale of what was outside of its control and the dilemmas it faced that were common to many countries, but surely any such history should also highlight the failure to take advantage of being an island.

Come the summer, if Northern Ireland breaks from its lockdown shackles and we are still in them, will that not expose, yet again, the farce of two strategies on one small island?

There is a troubling psychology to all this which has involved us being, ironically, infantilised by an immature Government. Telling us we are “remarkably resilient” is just another example of that.

Adding that “the end is truly in sight” was also a dubious assertion by the Taoiseach when, on the same day, the recovery plan – that he unveiled – warned that next winter “there are real risks that we may face the same challenges in controlling Covid-19 and protecting our health service as we did during this winter”.