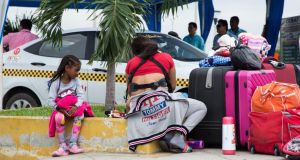 A Venezuelan woman changes her baby’s nappy next to official CEBAF taxis, at the border crossing between Ecuador and Peru. Photograph: Paul Musiol

In November 1984 political representatives from across Latin America gathered in Colombia to discuss the refugee exodus provoked by civil war in Central America. Sixteen countries, including Peru, agreed to sign the Cartagena Declaration – a non-binding agreement which expanded the definition of what makes a person a refugee.

Under the 1951 Geneva Refugee Convention, a refugee is “someone who is unable or unwilling to return to their country of origin owing to a well-founded fear of being persecuted for reasons of race, religion, nationality, membership of a particular social group, or political opinion.”

The 1984 agreement extended this definition to include “persons who have fled their country because their lives, safety or freedom have been threatened by generalised violence, foreign aggression, internal conflicts, massive violation of human rights or other circumstances which have seriously disturbed public order”.

Just over 30 years later, hundreds of thousands of Venezuelans started to flee poverty, hunger and political turmoil in their home country. To date, more than five million people have left with over 870,000 migrating to Peru.

Peru initially welcomed Venezuelans with open doors. However, when numbers soared in 2018 and 2019, the government introduced measures to regulate the flow of people, including the establishment of a new visa.

The Venezuelan crisis was Peru’s first real chance to apply the Cartagena declaration, says Cecile Blouin from the Pontifical Catholic University of Peru.

She believes the Peruvian government is concerned about the high financial cost of granting asylum to the country’s 482,000 Venezuelan applicants and worries it could create a “pull factor” for more people to come.

While Amnesty International praised Peru for “initially displaying admirable generosity to Venezuelans seeking protection”, it recently criticised the government for its “increasingly restrictive practices at its borders”.

The majority of people fleeing Venezuela meet the refugee definition under either the Cartagena declaration or Geneva convention, which makes them refugees “regardless of whether a government wishes to formally recognise their status or not”, said Amnesty.

By applying the declaration, Peru could regularise the status of a significant number of Venezuelans which would encourage their integration into Peruvian society, says Amnesty.

Peruvian economist Elmer Cuba says a number of steps are needed to promote this integration, including the amendment of a Peruvian law which states that foreigners must pay 30 per cent tax during their first year in the country.

“That 30 per cent isn’t proportional,” says Cuba. “This law takes away a third of the salary of a Venezuelan which makes it impossible to start a new life.”

“Venezuelans are being pushed to find work informally which is dangerous as it leads to xenophobia. If you’re here illegally you will accept poor work conditions and are open to exploitation.”

Another barrier to formal employment is that under Peruvian legislation, only 20 per cent of a company can be made up of foreign workers and business owners must prioritise Peruvian employees.

“Imagine you’re a Venezuelan who has fled his home and you want to set up a restaurant here but you’re not allowed hire your compatriots,” says Cuba. “It’s ridiculous.”

“We had never experienced such a massive migration into our country,” Orrego told The Irish Times. “We deployed large number of staff to our borders to help these people. As the numbers increased we had to start asking for passports but still made exceptions for young children, pregnant women and sick people.”

She says criticism of the humanitarian visa – introduced in June 2018 – is totally unfounded and that Venezuelans remain unaware of the benefits of the visa. “It allows them to work and open bank accounts and they can renew it after 183 days. It’s also free and we want to get that message out to Venezuelans.”

“We as Peruvians have been through difficult times ourselves and know what migration is like. We need to work to integrate Venezuelans into our communities and fight against any xenophobia towards these people.”

“It’s like a booster to the economy,” he says. “The arrival of Venezuelans means a larger labour force and we’re finding that the average Venezuelan has a higher level of education than the average Peruvian.

“These are two positive effects of migration which we are not taking advantage of. We have Venezuelan doctors working as taxi drivers here. If we could hire these people to do what they’re trained for it could have a very positive fiscal impact.”

Nine out of 10 Venezuelans continue to work in the “shadow economy”, says Perea, with many younger people who should be in school working to pay bills and send money home.

Despite his optimism about economic growth, Perea is conscious of the growing discrimination towards migrants. “We all speak the same language, our cultures are very similar. The differences between us aren’t as dramatic as the difference between a Syrian and an Irish person.”

Last November, the World Bank reported that Venezuelans represented “a major economic opportunity for Peru”. Written before the Covid-19 pandemic, the report said Venezuelans could contribute more than 2.2 billion Peruvian soles (€60 million) in tax revenue over the next five years.

“Peru has acted with solidarity in response to the significant needs of the Venezuelan migrant and refugee population,” said Marianne Fay, World Bank director for Peru. “Today there is a unique opportunity to channel their immense potential to invigorate the country’s economy, transforming this challenge into an opportunity for all.”

In reality, the coronavirus outbreak inevitably means slower economic growth than Peruvian economists predicted. The health emergency has badly affected Venezuelan migrants, the majority of whom lost their work when Peru went into lockdown.

On March 15th, Peru declared a state of national emergency for 90 days and closed all its borders. At time of writing, Peru’s borders remain closed. While some Venezuelans have chosen to return home to wait out the pandemic in familiar surroundings, others continue to arrive into the country.

Refugees and migrants are not eligible for the state’s Covid-19 support scheme, with many relying on charity handouts to survive during lockdown. More than 200,000 Venezuelan migrant families are in a situation of extreme vulnerability with many living on one meal a day, warned Federico Agusti from the UN Refugee Agency in April.

“This virus does not discriminate and the fight to beat it is everyone’s. We will overcome this but we must do it together.”

1 Cluster of Covid-19 infections at Kerry ‘house party’ investigated
2 Hundreds of substitute teachers may be hired full-time to keep schools open
3 Brightest comet of the century visible in Irish skies for the next week
4 Miriam Lord: Paschal’s win makes Phibsboro the financial capital of Europe
5 Reopening of pubs that do not serve food may be delayed beyond July 20th
Real news has value SUBSCRIBE