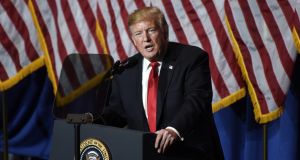 US president Donald Trump has weighed in on the abortion debate, arguing that he will deliver a strongly anti-abortion agenda if re-elected in 2020.

In a series of weekend tweets – his first comments since Alabama introduced the most restrictive abortion law in the country last week – the president said he was “strongly pro-life” with the exception of rape, incest and when there is a “serious health risk” to the mother, “the same position taken by Ronald Reagan”.

He also highlighted his nomination of conservative judges since his election.

“We have come very far in the last two years with 105 wonderful new federal judges (many more to come), two great new supreme court justices . . . and a whole new and positive attitude about the right to life,” he tweeted.

“If we are foolish and do not stay united as one, all of our hard fought gains for life can, and will, rapidly disappear.”

Mr Trump’s explicit linking of an anti-abortion stance with next year’s presidential election is the latest indication that abortion may feature heavily in the election campaign.

The Governor of Alabama, Kay Ivey, signed into law new legislation outlawing abortion in virtually all cases last week. Doctors who perform the procedure could face up to 99 years in jail. An amendment to make exceptions in cases of rape and incest was defeated.

Lawmakers in the state have said they hope that the US Supreme Court – which now has a conservative majority since the appointment of Neil Gorsuch and Brett Kavanaugh by Mr Trump – will take up the case, potentially overturning Roe v Wade.

Pro-choice groups such as Planned Parenthood said they will challenge the new law in court, arguing that it is unconstitutional.

On Friday, Missouri became the latest state to restrict abortion access, passing a Bill banning abortion after eight weeks. Doctors would face up to 15 years in prison for violating those rules. The Republican governor of the state is widely expected to sign the Bill.

It follows similar moves in several states. Earlier this month Georgia introduced a so-called “heartbeat Bill” – banning abortions after six weeks, a point in the pregnancy when many women may not know they are pregnant. It follows similar Bills in states such as Ohio, Iowa and North Dakota. New York, in contrast, has liberalised its laws this year, allowing for abortions after 24 weeks in some cases.

Mr Trump’s announcement that he is “strongly pro-life” with some exceptions marks a change in position by the president. In 1999 he said he was “very pro-choice”. He campaigned in part during the 2016 campaign on the promise to appoint anti-abortion judges to federal courts if elected, a promise that appealed to many evangelical voters who ultimately supported him.

1 No time limits and no pre-booking: what the unpublished pub reopening guidelines reveal
2 Covid-19 may spread more easily in schools than thought, US report warns
3 Teenage boy dies at Powerscourt Waterfall in Co Wicklow
4 Gardaí surrender 13 people to Polish police
5 'There is no way I would go' - Irishman in Malta cancels trip home as two weddings put off
Real news has value SUBSCRIBE