Austria set for early election after collapse of coalition 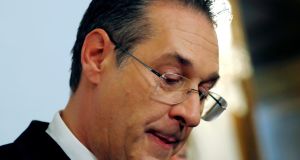 Europe’s far-right parties are scrambling to distance themselves from Austria’s populist Freedom Party (FPÖ), ejected from office after its leader was caught in a sting operation that collapsed Vienna’s coalition and triggered a snap election.

FPÖ leader Heinz-Christian Strache resigned on Saturday as vice-chancellor after videos showed him advising a woman how to finance his party by circumventing election finance laws. In six hours of talks, secretly filmed in an Ibiza villa in July 2017, Mr Strache encouraged the woman, posing as a Russia oligarch’s daughter, to take control of Austria’s powerful Krone tabloid in the hope of positive coverage for his party. In return he promised lucrative public contracts once in power.

On Saturday evening, after a high day of drama and public protests in Vienna, Chancellor Sebastian Kurz of the centre-right People’s Party (ÖVP) pulled the plug on his controversial coalition.

Sharing power with the FPÖ for 18 months had created “many situations I found difficult to swallow”, he said, “but after yesterday’s video, I must say quite honestly: enough is enough”.

The video had demonstrated FPÖ “abuse of power”, a cavalier attitude towards public funds and contempt for the Austrian media. In the recording Mr Strache is heard describing journalists as “the biggest whores on the planet”. In unreleased excerpts of the video, recorded before the October 2017 parliamentary election, the chancellor said Mr Strache had personally insulted him. According to government sources, attempts to salvage the government failed when the FPÖ refused to sacrifice other controversial party figures at cabinet.

“Fresh elections were not a wish but a necessity,” said Mr Kurz after meeting the president, promising to lead a caretaker government until polling day.

Mr Strache, a dental technician by profession, took over the FPÖ from the late far-right leader Jörg Haider in 2005 and turned it into one of Austria’s most popular parties, mixing nationalism and xenophobia with anti-immigration and Islamophobia.

His most regular source of scandal were links, as a young man and more recently, to far-right groups.

The 59 year-old said his alcohol-fuelled remarks were “stupid” and “irresponsible” and that he was standing down to avoid further damage to his party.

In the video he dreams aloud of “a media landscape similar to Orban’s”, a reference to an almost total takeover by allies of the populist Hungarian prime minister. Another ambition of the ex-FPÖ leader on the recording: to “open up strongly” his country to Russia.

“We have decadence in the west, in the eastern they’re normal,” Mr Strache can be heard saying.

Recordings published so far by Germany’s Der Spiegel and the Süddeutsche Zeitung daily show a nervous Mr Strache swigging energy drinks, alternating between delight and doubt at his prospective donor.

After six hours of talks he notices the supposed millionaire’s daughter has dirty fingernails.

“That doesn’t fit the image,” he says, but shrugs off doubts and urging an ally to assure the woman: “We are 100 per cent ready to help, come what may.”

Der Spiegel, which compared the videos to an “instructional video” for a “banana republic”, said it knew the source of the material but was not aware on what grounds the politician was lured to the villa, nor why the information was leaked now.

A snap election is a high-risk strategy for Austria’s 32 year-old chancellor. His party his low opinion of the most obvious grand coalition alternative with the Social Democrats (SPÖ) that ruled Austria almost continuously for the post-war era.

The fate of the FPÖ, one of Europe’s oldest and most successful far-right parties, rattled a rained-out rally of European populists in Milan on Saturday.

They hoped their Europe of Nations and Freedom (ENF) group could be the third largest in the next European parliament.