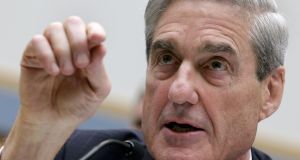 Special Counsel Robert Mueller, in a meeting with US President Donald Trump’s lawyers in March, raised the possibility of issuing a subpoena for Mr Trump if he declines to talk to investigators in the Russia probe, a former lawyer for the president said on Tuesday.

John Dowd told Reuters that Mr Mueller mentioned the possibility of a subpoena in the early March meeting. Mr Mueller’s subpoena warning was first reported by the Washington Post, which cited four people familiar with the encounter.

“This isn’t some game. You are screwing with the work of the president of the United States, ” Mr Dowd said he told the investigators, who are probing possible collusion between the Trump campaign and Russia. Mr Dowd left the president’s legal team about two weeks after the meeting.

The Post said Mr Mueller had raised the possibility of a subpoena after Mr Trump’s lawyers said the president had no obligation to talk with federal investigators involved in the probe.

After the March meeting, Mr Mueller’s team agreed to provide the president’s lawyers with more specific information about the subjects they wished to ask Mr Trump, the Post reported.

So disgraceful that the questions concerning the Russian Witch Hunt were “leaked” to the media. No questions on Collusion. Oh, I see...you have a made up, phony crime, Collusion, that never existed, and an investigation begun with illegally leaked classified information. Nice!

With that information, Mr Trump’s lawyer Jay Sekulow compiled a list of 49 questions the president’s legal team believed he would be asked, according to the Post.

That list, first reported by the New York Times on Monday, includes questions on Mr Trump’s ties to Russia and others to determine whether the president may have unlawfully tried to obstruct the investigation.

“We do not discuss conversations we have had or may have had with the Office of Special Counsel,” Mr Sekulow told Reuters on Tuesday evening.

Mr Trump criticised the leak of the questions.

“So disgraceful that the questions concerning the Russian Witch Hunt were ‘leaked’ to the media. No questions on Collusion,” Mr Trump wrote on Twitter on Tuesday.

“It would seem very hard to obstruct justice for a crime that never happened!”

Russia has denied interfering in the 2016 US presidential election, as US intelligence agencies allege, and Mr Trump has denied there was any collusion between his campaign and Moscow.

A spokesman for Mr Mueller declined to comment.–Reuters