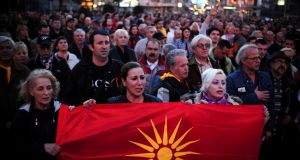 Protesters shout slogans while holding a Macedonian flag during a demonstration om Skopje on Tuesday against an agreement that would ensure the wider use of the Albanian language in the ethnically divided state. Photograph: Reuters

Crisis-hit Macedonia has become the latest diplomatic battleground for Russia and the West, after Moscow accused the European Union and Nato of trying to impose a pro-Albanian government in the Balkan state that could cause havoc across the region.

The Russian foreign ministry said on Thursday that western powers wanted to install leaders in mostly Slav Macedonia who would help Albania pursue an expansionist agenda, which allegedly involved “claims to large areas” of Montenegro, Serbia, Macedonia and Greece.

Moscow’s unsubstantiated allegations chime with those of Macedonia’s main nationalist party and its supporters, who have held street protests in recent days against an emerging coalition between the country’s Social Democrats and three ethnic Albanian parties.

The coalition would have a majority in parliament, but on Wednesday Macedonian president Gjorge Ivanov refused to endorse it, saying that its plans to boost the official status of the Albanian language “threatens the sovereignty of Macedonia”.

The EU and US sharply criticised the move by Mr Ivanov, who is an ally of former prime minister Nikola Gruevski and his nationalist VMRO-DPMNE party.

“We have repeatedly stated that all leaders of the country, including the president, must respect the outcome of [December’s] elections. In a democracy, one must acknowledge parliamentary majorities, even if one doesn’t like them,” said the EU’s enlargement commissioner, Johannes Hahn.

US envoy to Macedonia Jess Baily said on Twitter that he agreed with Mr Hahn, adding: “Concerned that Macedonia moving away from principles of democracy and rule of law, core Nato values.”

Last December’s elections, in which the VMRO-DPMNE won 51 seats to the Social Democrats’ 49, failed to end a now two-year crisis over a vast spying and corruption scandal that centred on Mr Gruevski and his allies. They deny all the allegations against them.

Mr Gruevski’s critics say he is now whipping up nationalism and fear of a “Greater Albania” to delay and potentially derail the work of Macedonia’s special prosecutor, who is pursuing investigations and charges derived from a cache of leaked wiretaps.

“He has pushed Macedonia into a constitutional and national crisis by denying the will of the majority of citizens and by preventing a legal and legitimate transfer of power,” the Balkan Insight news service quoted Mr Zaev as saying.

“I call on citizens not to succumb to provocations. Let’s stay calm and on the side of democratic processes which lead towards the formation of a new democratic government that will be focused on people’s real needs and on the rule of law.”