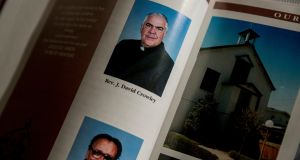 Everything felt normal until the news alert popped up on Cindy Depretis’ cellphone Tuesday afternoon. It was a link to a list of the hundreds of Catholic priests in Pennsylvania accused of abusing children in a bombshell grand jury report. She scrolled to the names of priests near Pittsburgh.

“I got to the Cs,” she recalled tearfully as she sat in her office at Holy Angels Parish. Friends started to text her. “Is that our Fr Crowley?” She could only force out one word: yes. The Rev John David Crowley for decades had been the hero of Holy Angels, a white clapboard church in southeast Pittsburgh, tucked below the bypass, by the old narrow-gauge railroad running along the creek. He was the pastor there for nearly 34 years, known as one of the most popular priests in the region. Then, in 2003, he abruptly retired.

This week, the church learned why: Crowley had been accused of sexual abuse, including of a minor, and the claim was found to be credible and substantiated. The bishop of Pittsburgh at the time, Donald Wuerl, now a cardinal and the archbishop of Washington, gave Crowley the choice to voluntarily retire and quit active ministry, or face removal.

Crowley chose retirement. The families of Holy Angels were kept in the dark. They even protested his departure on his way out. Across the country this week, Catholics reeled from the news that Pennsylvania priests had abused more than 1,000 children over decades, and that bishops largely hid their crimes from the public. In the Pittsburgh diocese, which had almost a third of the state’s accused priests, Catholics in nearly every parish tried to figure out if the pastors they knew had ever been accused, or had known, of allegations they kept secret.

Some of the names on the list were no surprise, as some priests had faced public criminal proceedings and were removed from ministry. Other priests had been the subject of rumours. But many, like Crowley, had died before their actions were publicly revealed.

As national anger has boiled over, and as the Vatican insisted to victims that Pope Francis was on their side and dioceses rolled out crisis communications playbooks, the families of Holy Angels have grappled with what to do. When asked about Crowley at the church this past week, parishioner after parishioner struggled to respond. A man leaned on the railing of the church steps and cried as he remembered how Crowley had baptised his children. Women confided that they had been tossing and turning every night, unable to sleep. After long silences, many insisted the allegations just had to be false.

The Rev Robert J Ahlin, the current pastor, sat motionless at the parish house the day after the report was released. When he arrived to take over after Crowley left, he remembered getting some calls from parishioners wary of the official line that he had chosen to retire.

Later, an adult man reported that Crowley had sexually abused him when he was 11 to 12 years old

“You always hear rumours,” Ahlin ( 74) said. “No one at the time said, ‘Fr did so-and-so, he was removed.’ Whether they had suspicions or not, I don’t know.” A few minutes later, Ahlin decided to read the grand jury’s findings for the first time. He silently pulled up page 631 of the massive report, where Crowley’s case was recorded: a mother and her twin adult daughters, one of whom was 16 at the time of victimisation, brought a complaint against Crowley in 1992 and again in late 2001.

Later, an adult man reported that Crowley had sexually abused him when he was 11 to 12 years old.

After Crowley arrived at Holy Angels in 1969, his charisma drew so many people to Mass that they often had to stand outside on the steps, or even down in the streets, because the aisles inside were already full. Word got around that if you were an unwed mother and your priest would not let you baptise your baby, or if you wanted to marry again but didn’t have the information to get an annulment, you could go to Crowley at Holy Angels in a Pittsburgh neighbourhood called Hays. “Whatever came to the door, he tried to handle it,” Ahlin remembered.

When the parish school got too small to stay open, he bought a school bus to drive children himself to the new school each day. In the summer of 1992, a mother and her adult twin daughters came forward and said Crowley abused them, one of whom was 16 at the time, according to the report. The Pittsburgh diocese told the New York Times the abuse occurred in 1976. Three months later, Crowley was sent for a week-long mental health evaluation at St Michael’s Community. Evaluators “opined that Crowley was being truthful in his denials” and recommended that he have “outpatient therapeutic support to address insecurities, low self-esteem and obsessive-compulsive tendencies”, the report said.

He returned to his parish. Two years later, the church surprised him with a large outdoor party under a tent to celebrate his 40th year as a priest. People at Holy Angels like to tell a story of a summer flood in 2001, when heavy rain destroyed many homes in the area. Crowley sat on the church steps, watching the water rush through the streets, before turning the church into a hub for the community’s cleanup operations.

Around the same time, out of the spotlight, the mother and her daughters again brought their complaint to the diocese. It wasn’t until the next year, amid the outcry over the Boston Catholic sex abuse scandal and cover-up, that the diocese referred the allegation to the Allegheny County district attorney, and to the church’s review board. By then, the statute of limitations had long expired.

“The independent review board found the allegation credible and recommended that Fr Crowley either be allowed to retire without faculties or, if he refused, that a canonical trial be commenced,” the Pittsburgh diocese said in a statement to the Times this week.

Wuerl allowed Crowley to tell his parish that he was voluntarily accepting an early retirement because he was two years shy of 75, the age when priests voluntarily offer to resign, according to the grand jury report. “This was permitted, according to Wuerl, to ‘protect his [Crowley’s] reputation in the widespread community’,” it states.

In his final sermon on January 12th, 2003, Crowley offered words that now carry new meaning. “Thank you for entrusting your children to me,” he said. “I apologise if I have ever hurt you through neglect or not taking notice, or forgetfulness.” A parishioner who wrote down the sermon, stored in a file at the parish, added his own reflection: “We have met Christ passing by.”

The church moved on. Crowley died in 2006. Holy Angels still keeps a folder of all the condolence letters from his funeral. Then came the report this week. Parishioners found themselves frustrated by unanswered questions that challenged their strongest beliefs. Many are inclined to stick by the man they had long trusted, despite the sinful acts he has been accused of.

Cheryl DePretis, who has been coming to Holy Angels for more than 40 years, finally decided to read the report because she works as the church assistant, and she wanted to know how to answer calls that were coming in. “I didn’t see any proof,” she said. “I choose to remember him...” – her voice trailed off.

The diocese, which had prepared for months for the report’s release, did not reach out to Holy Angels in advance. Some church leaders wish they had had more notice, if only to better prepare to help the traumatised congregation.

At the Holy Angels crochet circle on Thursday morning, women reflected on the awful week, for them and for the broader church. “I feel they shouldn’t have covered it up at the beginning,” said Eleanor Martin of the diocese’s handling of abuse cases as she made a pom-pom for a purple hat. “Had this come out 30 years ago, there’d not be as much of it.”

That same day, Ahlin got a call from a woman who identified herself as one of the victims, and who was distraught. “She felt this was putting her through all that pain again,” he said. “That’s the first time I’ve ever heard from her.” Sunday’s services weighed heavily on his mind. “I’ve been thinking something has to be said,” Ahlin said. “But I can’t even formulate how to even approach it.” A day earlier, he had questioned the allegations against Crowley. After the call, he said he was not sure if he would tell his congregation about his doubts. “Given the way she expressed herself,” he said, “I’d have to believe what she said.”