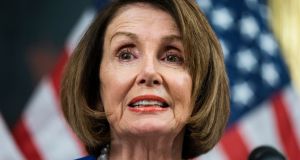 Nancy Pelosi, the speaker of the US House of Representatives, has warned Britain that the US Congress will not sign off on a trade agreement with Britain if the Northern Ireland peace process is jeopardised by Brexit.

“There won’t be any trade agreement that violates the Good Friday Agreement,” Ms Pelosi told reporters on the fringes of an event to mark the contribution of congressman Richard Neal to the Northern Ireland peace process.

“Our message to the British government is: ‘Don’t be misled into thinking there will be a US-UK trade agreement if the Good Friday Agreement accords are violated,’” adding that she delivered a similar message when she and members of congress visited Northern Ireland earlier this year.

Ms Pelosi’s intervention comes at a critical juncture in the Brexit process ahead of a possible Brexit deal later this week at the European Council in Brussels.

As she was speaking at the event, US president Donald Trump unleashed a series of tweets, claiming that Ms Pelosi “needs help fast” and is “a very sick person,” after she cut short a meeting in the White House earlier in the day to discuss Syria.

Ms Pelosi’s comments on Brexit were delivered as Massachusetts congressman Richard Neal was presented with a lifetime achievement award by the Irish American Democrats at a reception on Wednesday night in Washington.

Mr Neal, who was appointed chair of the influential Ways and Means committee this year after Democrats won control of the House of Representatives in the wake of the mid-term elections, recounted the influence his Irish heritage had on his life.

Accepting the award, he praised Ms Pelosi for her stance on Brexit and the importance of preserving the Belfast Agreement, recalling how the speaker had said during a visit to the Border that the peace accord is “sacrosanct” and that “in no circumstances could it be abandoned to the Brexiteers.”

Stella O’Leary, the president of Irish American Democrats, praised Mr Neal and Ms Pelosi’s commitment to preserving the Northern Ireland peace process. She thanked both political leaders for their “clear and uncompromising message that the Good Friday Agreement must be adhered to in any Brexit decision.”

Minister for Finance Paschal Donohue and Minister of State Ciaran Cannon, who are in Washington for the IMF-World Bank meetings, were also in attendance.

Former Sinn Féin president Gerry Adams, who delivered an address at the National Press Club earlier in the day, also attended the gathering.

Speaking after the event, he expressed a cautious welcome that a Brexit deal could be in the offing. But he said Brexit would have a negative outcome for Northern Ireland whether or not there was a hard or soft Brexit.

“People in the North voted to stay within the European Union. The government in London totally disregarded that and disregarded the effect that would have across the entire island of Ireland,” he said.

Mr Adams also criticised British prime minister Boris Johnson. “I don’t believe for a second that Boris Johnson isn’t aware of the consequences for Northern Ireland, the truth is he doesn’t care.”