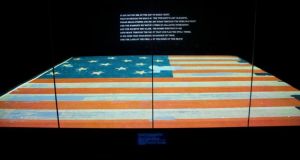 The flag that inspired the US national anthem ‘Star-Spangled Banner’, in the Smithsonian museum in Washington. Years ago parts of the flag were snipped off and handed out as mementos. The Smithsonian has reacquired some of them and added them to its collection. Photograph: AP Photo/Pablo Martinez Monsivais

As England seeks to quell rebellious feelings within the Union ahead of next week’s referendum on Scottish independence, Americans this weekend celebrate the 200th anniversary of the writing of The Star-Spangled Banner, the poem inspired by another conflict involving the British that would later become the American national anthem.

Francis Scott Key, a young US lawyer and amateur poet, was sent by the United States to negotiate the release of an American hostage on a British naval ship during the War of 1812. The conflict, in fact, lasted two and a half years and on September 13th and 14th, 1814, Key was being held on a British ship while they bombed Fort McHenry, a coastal fort guarding the entrance to Baltimore Harbour.

He was so taken by the resistance shown by the American forces that he wrote the poem, Defence of Fort M’Henry. A month later, the poem was renamed The Star Spangled Banner and put to the music of To Anacreon in Heaven, a drinking song written by British composer John Stafford Smith for a London musicians’ club.

During the September 1814 attack, part of the Battle of Baltimore, Key saw the Americans emerge victorious following a British retreat, despite a night of shelling by HMS Erebus and HMS Meteor – “the rocket’s red glare, the bombs bursting in air”.

Out of the smoke on the morning of September 14th – “by dawn’s early light” – after the British guns fells silent the large canvas of 15 stars and 15 stripes, The Star Spangled Banner, caught Key’s eye “Our flag was still there,” he wrote.

Pennsylvania flag-maker Mary Pickersgill had been commissioned by the military to sew the flag measuring 30 by 42 feet assisted by her teenager daughter and seven seamstresses at a cost of $405.

Key started to write the poem the next day on the back of a letter while sailing back to Baltimore and after his release on September 16th completed it in the Indian Queen Hotel in Baltimore before his brother-in-law judge Joseph H Nicholson took it to a printer. The text appeared in local paper, The Baltimore Patriot and Evening Advertiser.

Baltimore has been celebrating the bicentennial of Key’s work since Wednesday and the commemorative events continue until Tuesday. Yesterday, president Obama visited Fort McHenry in Baltimore to mark his own commemoration of this landmark anniversary.

An aspect of Key’s famous work, said to be a standout exception in a career of bad poems, that is unlikely to be celebrated is the poem’s less-remembered third verse, in which Key condemns the “foul footsteps” of the slaves who had fought alongside the British.

A fifth verse appeared in print for the first time in 1816 lauding Andrew Jackson for beating the British in a subsequent battle at New Orleans in the last major skirmish of the 1812 war.

It makes you consider Key’s description of America as the “land of the free” in a different light.

A new biography of Key, the first in more than 75 years, What So Proudly We Hailed by historian Marc Leepson, investigates his complicated standing in American history.

Key was a slave owner who opposed abolition and his descendants later supported the Confederacy and denounced The Star Spangled Banner after it became the unofficial anthem of Northern soldiers fighting the South.

As an attorney, he represented slave owners seeking their “property” back. As Washington’s district attorney, he played a role in helping to start the city’s first race riot, the so-called Snow Riot of 1835, by aggressively prosecuting a black man accused of attempting to murder his white mistress.

In his defence, Key stood blocking the door of a jail as he attempted to stop a lynch mob from hanging the suspect during the riot and, beyond this prosecution, acted free of charge for black slaves seeking their freedom under a Maryland statute.

William Shakespeare’s influence on Key is not likely to be marked this weekend either. Historian Marc Ferris in his book, Star-Spangled Banner: the Unlikely Story of America’s National Anthem, noted how the Bard paired the word spangle with stars in A Midsummer Night’s Dream (“by spangled star-light sheen”) and The Taming of the Shrew (“what stars do spangle heaven with such beauty”.)

Leepson has described Key as “a bad amateur poet” who never wrote a song in his life and might even have been tone deaf. This might explain why some singers struggle with the vocal acrobatics required by a wordy song spanning an octave and a half.

Regardless, Key’s patriotic words have enjoyed longevity. From sports stadiums to school halls to military ceremonies, the quickly-penned words of what he witnessed on September 13th-14th 1814 have rung out for two centuries. Not bad for a one-hit wonder.