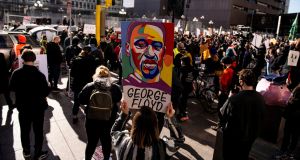 People demonstrate outside the Hennepin County Government Center in Minneapolis, Minnesota in advance of the trial of former Minneapolis Police officer Derek Chauvin in the death of George Floyd last May. Photograph: Stephen Maturen/Getty Images

Jury selection in the murder trial of the police officer accused of killing George Floyd could begin as early as Tuesday, as the US prepares for one of the highest-profile trials in recent years.

Mr Floyd died on May 25th in Minneapolis after a white police officer, Derek Chauvin, pressed his knee on the victim’s neck for almost nine minutes.

Police were responding to a call from a shop owner claiming that Mr Floyd had tried to use a counterfeit $20 bill.

The arrest of Mr Floyd, during which Mr Chauvin kept his knee on the victim’s neck even as he gasped for breath and pleaded for help, was captured on camera phone.

The 46-year-old’s death prompted protests across America and the world, and sparked a global reckoning about racial injustice.

Jury selection had been due to commence on Monday. But the judge in the trial delayed the start of the process pending advice from the court of appeal over an effort by the prosecution to add a third-degree murder charge.

An appeal to that decision could delay the trial even further, though the court will reconvene on Tuesday. Currently, Mr Chauvin is facing two charges – second degree manslaughter and second degree unintentional murder.

The process of selecting jurors could take weeks, with some legal experts highlighting the difficulty in finding unbiased jurors in Minneapolis given the huge media coverage of Mr Floyd’s death. A jury of 12 and four alternates will be chosen by lawyers from both sides. Prospective jurors have already completed a 16-page questionnaire about their knowledge of Mr Floyd’s death.

Mr Chauvin, who had been held in a maximum security prison following his arrest , was released on a $1 million bond in October.

The accused appeared in court on Monday, wearing a black face mask and taking notes during the hearing.

Mr Chauvin’s attorney has argued in court documents that Mr Floyd likely died from fentanyl or a combination of drugs, or from underlying health conditions – not has a result of his client’s knee on his neck.

Three other officers who were with Mr Chauvin as he kneeled on the victim’s neck will face trial later in the year. Two of them helped restrain Mr Floyd and another stopped people from intervening.

Minneapolis, the largest city in the midwestern state of Minnesota, was braced for protests as the trial begins. The national guard was deployed to guard the court, which was protected by barricades and barbed wire.

Members of Mr Floyd’s family and civil rights activists were present outside the court on Monday. The judge has ruled that only one member of the deceased’s family can attend in person each day.

The House of Representatives passed the George Floyd Justice in Policing Act last week. The new legislation bans police “choke holds”, racial profiling, and also proposes changes to the so-called qualified immunity principle which has protected law enforcement officers in the past.

However, the vote fell broadly along party lines, with Republicans opposing the legislation.

President Joe Biden supports the Bill, and has urged the Senate to pass the legislation.

“Never again should an unarmed individual be murdered or brutalised by someone who is supposed to serve and protect them,” said representative Karen Bass, who co-sponsored the Bill.

“Never again should the world be subject to witnessing what we saw happen to George Floyd in the streets in Minnesota.”

Mr Floyd’s death sparked widespread protests across the country last year, including outside the White House.

Washington DC’s mayor Muriel Bowser, who clashed with former president Donald Trump about his deployment of law enforcement to disperse protesters, renamed a street near the White House as Black Lives Matter plaza.