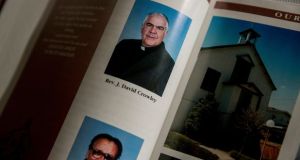 The US justice department has opened an investigation into Roman Catholic dioceses in Pennsylvania accused of covering up sexual abuse for decades, a significant escalation in scrutiny of the church.

The inquiry is believed to be the first statewide investigation by the federal government of the church’s sex abuse scandal.

It comes two months after the Pennsylvania attorney general’s office released an explosive grand jury report charging that bishops and other church leaders had covered up the abuse of more than 1,000 people over a period of more than 70 years.

Seven of the eight dioceses in the state, Philadelphia, Erie, Harrisburg, Scranton, Pittsburgh, Greensburg and Allentown, all said they had received federal grand jury subpoenas from the US attorney’s office for the Eastern District of Pennsylvania requesting documents. The eighth, Altoona-Johnstown, did not respond to a request for comment.

“This subpoena is no surprise considering the horrific misconduct detailed in the statewide grand jury report,” the Diocese of Greensburg said in a statement. “Survivors, parishioners and the public want to see proof that every diocese has taken sweeping, decisive and impactful action to make children safer.”

News of the subpoenas threatened to deepen the crisis faced by the Catholic Church as it struggles through a new chapter of the sex abuse scandal, which emerged out of Boston more than 15 years ago.

Avenues of inquiry could include whether sexual predators were reassigned, people were instructed not to contact police or any children were taken across state lines for illicit purposes, according to The Associated Press, which first reported the subpoenas.

“I hope that this encourages church leaders at every level, and in every locale, to voluntarily open their files on all priests who have been credibly accused in past decades,” said the Rev. James Martin, a Jesuit priest and editor at America Magazine.

“It’s also important to note that, today, any credibly accused priest is immediately removed from ministry. But before the truth can set us free, it must first be revealed.”

The Pennsylvania report followed the resignation of Cardinal Theodore McCarrick, the former archbishop of Washington, who is accused of sexually abusing seminarians and minors.

Since then, the fallout has continued. Last week, Pope Francis accepted the resignation of Cardinal Donald Wuerl, the archbishop of Washington, who was described in the Pennsylvania report as mishandling sex abuse allegations against priests when he was bishop of Pittsburgh.

One issue, experts say, is that there has been no comprehensive and independent measurement of the full scope of sexual abuse in the church in the United States. Until the Pennsylvania report, investigations by grand juries and attorneys general looked only at single dioceses or counties.

The attorneys general in at least a dozen other states, including New York, New Jersey and Florida, have said they will investigate possible sexual abuse within the Catholic Church. A number of states have already set up tip lines, and others have appointed special task forces with subpoena power.

The New York state attorney general has issued subpoenas to all eight Catholic dioceses in the state. The attorney general, Barbara Underwood, has said she was inspired by the Pennsylvania report.

The ambition and scope of the investigations vary by state, with some set up to be more combative than others. Bishops have mostly pledged cooperation, and in some cases, the announcement of a government inquiry has followed voluntary disclosures of abuse by church leaders.

On Thursday, some American Catholics said they were relieved to hear there would be further investigation by the federal government.

“It’s a reasonable next step,” said William Maher, 61, a practicing Catholic in Western Pennsylvania who had two uncles who were priests. “Certainly something that needs to occur to continue to clean out and get to the bottom of it, and hold people accountable for some pretty horrific things.”

The grand jury report this summer has continued to reverberate through Pennsylvania. A former priest in the Diocese of Erie, who was named in the report, pleaded guilty Wednesday in state court to felonies for the repeated sexual assault of an altar boy and the attempted assault of another boy.

On Wednesday night, the state Senate adjourned without voting on a measure, prompted by the grand jury report, that would create a brief window for victims of childhood sexual abuse to sue their abusers, and institutions that may have shielded them, even after the civil statute of limitations had passed.

The measure, which was opposed by some Republican leaders, was pushed chiefly by state Rep. Mark Rozzi, who was raped over 30 years ago by a priest in the Allentown diocese. Rozzi hopes the federal investigation might encourage the state Senate to take the matter back up.

“This is so much bigger than we think it is, still,” Rozzi said. “It will expose the hierarchy of the bishops and their role in this,” he said, adding that he had forgiven the priest who had abused him but not the church officials who knew and did nothing. “Judgment Day is coming for them and they’d better be prepared.” – New York Times