Woman is seriously injured, while a cruise ship carrying 500 people is left unmoored 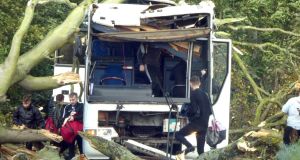 Students from Dundee University exit a bus after high winds brought by Storm Ali caused a tree to fall onto the vehicle, in Fife. Photograph: John Bynorth/Environmental Protection Scotland/PA Wire

A woman was seriously injured as Storm Ali struck Britain.

The woman was injured after a tree fell on to her car in Tarporley, Cheshire, England.

A spokesman for Cheshire Fire and Rescue Service said crews were called to Forest Road just after 1.30pm when the tree fell on the car, trapping the woman inside.

Firefighters worked with a tree surgeon to help remove the tree before cutting the roof of the vehicle off and freeing the woman.

She was taken to hospital by air ambulance.

In Scotland, emergency services were called to rescue a man who became trapped beneath a digger in a river during strong winds.

The incident happened at about 10am at Rogart in the Highlands.

He was taken to hospital with a suspected fractured rib.

More than 70,000 homes have been left without power across Scotland.

Gusts of 165km/h hit the Tay Road Bridge in Dundee at 3pm, according to bridge equipment.The bridge was shut to all traffic.

Elsewhere, tugboats were called to the Nautica cruise ship which slipped its berth in Greenock.

Strong winds saw the vessel — which had 478 passengers and 26 crew — leave the dock after its mooring lines parted. There have been no reports of injuries.

A section of Princes Street in Edinburgh was closed after parts of a shop roof flew off in strong winds. Police Scotland was alerted to lead falling from the Topshop building at about 12.30pm on Wednesday.

The Met Office said winds of 124km/h were recorded in Kirkcudbrightshire in Scotland, 119km/h gusts hit Capel Curig in Wales and 109km/h was recorded in St Bees Head, Cumbria.

As Ali rolled in, the Met Office updated its amber weather warning of wind, saying there was a high likelihood of impacts across a swathe of the UK.

The weather alert, which was in place until Wednesday evening, warned that flying debris was likely and could lead to injuries or danger to life.

A less severe yellow warning for wind was in place until Wednesday night.

ScotRail said it was dealing with “severe disruption” across all of Scotland and advised people not to travel.

The worst of Ali’s weather was expected in the north, although areas outside of those covered by official weather warnings were unlikely to escape wet and windy conditions.

While southern parts of England and Wales could reach continued unseasonable highs of up to 24 degrees Celsius, it was expected to feel cooler due to the strong winds, Met Office meteorologist Mark Wilson said.

The unsettled weather is due to last right through the week, but an improvement is expected early next week as drier weather is set to take hold. – PA