Ian Paisley welcomes election of ‘down to earth’ Trump

DUP MP in regular contact with president-elect; hopes he will ‘remember Northern Ireland’ 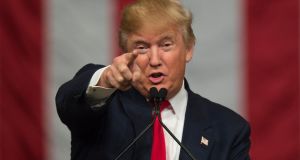 Donald Trump’s election to the White House is proof that 2016 is “the revolutionary year” and that voters “are no longer buying the stuff that is served up to them by the political elites”, said Democratic Unionist MP Ian Paisley, who has met the president-elect every year for the last decade.

Describing Mr Trump as “welcoming, a great conversationalist and an impressive, warm family man”, Mr Paisley said: “He is very open about what he wants to do and what he wants to achieve and I think if he brings that openness and that refreshing down to earth groundedness into the office of the president that will be a very, very beneficial skill to have there,” he said.

The billionaire’s staff are “intensely loyal” and ready to “take a bullet” for him, said the North Antrim MP: “I think that says a lot about the character of the boss”.

Mr Trump met his father, Rev Ian Paisley Snr, more than a decade ago. He said the two confident, dominant characters admired each other, rather than clashed: “He christened my dad ‘the Legend’ and we then used to tease him about that. He was very, very complimentary and the two of them got on very well.”

The outcome of the US election mirrored the Brexit referendum, in which voters made decisions not on the basis of policies, but rather on a mood that is demanding fundamental change: “People are no longer buying the stuff that is served up to them by the political elites. They know what truth is and they know what lies are and they are just not buying it any more from the politicians.”

The MP’s brother Kyle, a Free Presbyterian minister, has a less positive view of the president-elect, publishing a tweet that declared: “How some evangelicals could talk about a ‘moral argument’ for supporting an immoral man to head their country is beyond me . . .”.

Saying that he does not vote “on the morality, sexuality or gender of the candidate” when he enters a polling station, Mr Paisley Jnr said: “I vote on the candidate and a whole host of issues about the candidate,” he says. Despite their criticism of Mr Trump’s remarks during the campaign, Mr Paisley noted, large numbers of women and Latinos had voted for the Republican candidate.

He said he had met Mr Trump nearly every year since 2005. He has been in regular private email correspondence and had “some nice” replies to messages during the campaign. “I take the view that I was put in a fortunate position in my job as a politician that I have this contact. This contact now just happens to be one of the most powerful men in the world and I would be foolhardy not to keep that contact open and hopefully to say ‘Hey, remember Northern Ireland in all the stuff that you are actually doing’.”

SDLP leader Colum Eastwood “will come to regret” his declaration that he would not visit the White House during a Trump presidency. The SDLP leader was entitled to have views on Trump’s controversial campaign, but if someone apologised for their behaviour you should view it as “brave” and stop “rubbing his nose in it. What if this guy is a two-term President?” he ponders. “For eight years the SDLP have now excluded themselves from the most powerful office in the world. Clever, not.”

The Democratic Unionist was unsympathetic to demands from the Republic for immigration reform to ease the lives of 50,000 Irish living illegally in the US: “What they should do is make sure they are in America legally and lawfully,” he said. “America has a very generous immigration package for Northern Ireland, and indeed for the Republic of Ireland, and if people want to willingly breach that, well, that is their lookout. I certainly would not advocate that.”

He has no fears that Mr Trump’s plans to encourage US multinationals to return operations home will lead to a loss of any of the 24,000 people employed by them in the North. “If I was in the Republic of Ireland I would be a wee bit more worried,” he said.