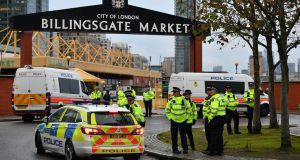 Police have announced they have made almost 1,300 arrests of Extinction Rebellion protesters since Monday, as activists hope the weekend will swell their numbers for a protest march through central London.

Animal rights activists affiliated with Extinction Rebellion claimed 28 of their supporters were arrested on Saturday morning while attempting to block access to Billingsgate fish market in east London.

On Saturday, Extinction Rebellion’s activists are hoping supporters who have been unable to attend demonstrations and actions during the week will join a protest march gathering at St James’s Park from 1.30pm.

Others headed to Westminster magistrates court, where the Paralympian James Brown denied causing a public nuisance after he climbed on top of a passenger plane at London City airport on Tuesday.

Hundreds of protesters remained camped in Trafalgar Square, where police were continuing efforts to clear them from their final roadblock in Westminster, and at a new camp site in Vauxhall.

Activists were hopeful that Lambeth council, which earlier this year passed a motion declaring a climate emergency, would allow them to use Vauxhall Pleasure Gardens as a “safe space” for up to a week. They have planned an itinerary of workshops and events for campers and visitors.

Earlier on Saturday morning, protesters from Extinction Rebellion’s Animal Rebellion chapter sat down to block the entrance to Billingsgate, the UK’s largest inland fish market, while one demonstrators locked herself to the entrance, a statement from the group said.

About 200 protesters who had gathered in Canary Wharf began their protest at about 3.30am, the group said in a statement circulated to the media.

Police initially tried to prevent them from reaching the market but relented after negotiations, the group said. Billingsgate market management refused a request to enter into a dialogue, according to protesters.

The Metropolitan police did not respond to a request for comment on the demonstration.

Kerri Waters, a spokesperson for Animal Rebellion, said: “To many, eating fish is seen as the healthy choice. But just as land animals suffer, so do fish, who think, make friends and feel pain. But their suffering goes unnoticed.

“At London’s Billingsgate Market, thousands of fish, stolen daily from their ocean homes, lie dead or dying. Many will have suffocated slowly when pulled aboard fishing vessels, whilst thousands of others remain alive as they’re transported by lorry to the market, where they’ll be gutted or boiled alive.”

Another spokesperson for the group, Alex Lockwood, said: “It was our duty to come here and make these demands that we must transition to a sustainable food system and stop exploiting the millions of fish that pass through this market every year.”–Guardian