Brexit a ‘colossal misjudgment’ that could break up UK, Major warns 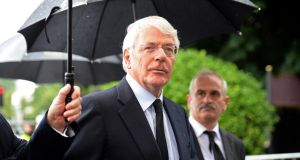 Former British prime minister John Major has said Brexit is ‘a colossal misjudgment’ that could lead to the break-up of the UK. Photograph: Eric Luke/The Irish Times.

Brexit is “a colossal misjudgment that will diminish” the United Kingdom while also threatening its future existence, former British prime minister John Major has said.

“It will damage our national and personal wealth and may seriously hamper our future security. It may even, over time, break-up our United Kingdom. It will most definitely limit the prospects of our young,” Mr Major said in a speech in the UK Foreign Office on Tuesday.

In a barbed attack, Mr Major said leading Brexit “princelings” such as former British foreign secretary Boris Johnson, who is now angling to become prime minister, will never be forgiven “for their false promises”.

“We know the post-Brexit world will be very different from now. It cannot be otherwise, because no form of Brexit will remotely match up to the promises made by the Leave campaign in the referendum: they were vote-gathering fantasies, not serious politics,” he said.

He said belligerent “noises” from those who want to replace Theresa May are now making the challenges she faces even more difficult, and that those intent on promotion are “rarely the most suitable to be entrusted with power”.

“What government is not about is cheap grandstanding. It’s not about deceiving the electorate with slogans, or soundbites, or untruths or half-truths. It’s not about windy oratory that says nothing,” Mr Major added.

“And — most emphatically — it’s not about princelings fighting for the political crown of premiership. Coded messages that shriek ‘I’m the one’ are about as subtle as a punch on the nose.”

Brexiteers responsible for persuading the British to leave the European Union in the 2016 referendum will never be forgiven for their “false promises”, Mr Major warned.

The 2016 referendum was a “colossal misjudgment”, he said, adding that “it will most definitely limit the prospects of our young.

“And — once this becomes clear — I believe those who promised what will never be delivered will have much to answer for. They persuaded a deceived population to vote to be weaker and poorer. That will never be forgotten — nor forgiven.”

Mr Major said the UK would no longer be a “buffer between the Franco-German steamroller and smaller nations”.

“There is irony here: over 70 years ago, Britain stood alone to fight for Europe, now we freely choose to stand alone and, in so doing, undermine Europe.

“‘So what?’ committed Brexiteers say, ‘we won’t be members; it’s Europe’s problem.’ But that ignores reality. How can it not be our problem, too?

“In the hot heat of debate it should not be forgotten that we ignore the EU, disdain it, or stand aside from it, at our own risk.”

Mr Major expressed concern that as the extremes of right and left gained strength, the moderate “centre vote” would lose its traditional influence over policy.

“Our nation should not tolerate the unreasoning antipathy of the extremes — to the EU, to foreigners or to minority groups,” he said.

“Such antipathy is repellent, and diminishes us as a nation. Softer, more reasonable voices should not be drowned out by the raucous din of the loudest.

“I freely confess to a taste for compromise. I have always preferred good old British pragmatism to rigorous ideology. Politics is real life.

“It isn’t warfare. It isn’t a popularity contest. It’s about people. It’s about four nations who deserve more than an ideological tug-of-war.”