Trump’s officials signal US could stay in Paris climate agreement 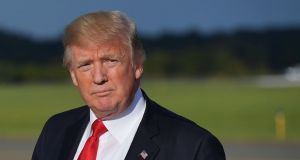 Officials for US President Donald Trump have signalled a further softening of America’s resolve to leave the Paris climate accord. Photograph: AFP/Getty Images

Senior Trump administration officials on Sunday signalled a further softening of America’s resolve to leave the Paris climate accord, amid signs that the issue will be discussed at the United Nations general assembly in New York this week.

Secretary of state Rex Tillerson and national security adviser HR McMaster both indicated that the US is open to negotiations on staying in the landmark international agreement to limit mankind’s role in global warming.

Donald Trump announced the withdrawal from the deal in June, leaving the US with only Syria and Nicaragua for company outside the global agreement.

A US withdrawal from a deal made under the Obama administration was a Trump campaign pledge.

The rules of the pact do not, however, allow the US to physically pull out until 2020.

On Saturday the White House denied reports that it planned to remain in the agreement, saying its position on leaving was unchanged and that it would only stay in if it got more “favourable” terms.

Although Tillerson and McMaster reiterated that the US wants a better deal, their willingness to talk about potential discussions on remaining in the accord was in striking contrast to the hostile tone taken by Trump on the issue and America’s previous position: that it planned to leave first and negotiate later.

“The president said he is open to finding those conditions where we can remain engaged with others on what we all agree is still a challenging issue,” Tillerson told CBS’s Face the Nation.

“So I think the plan is for Director Cohn to consider other ways in which we can work with partners in the Paris climate accord. We want to be productive. We want to be helpful.”

The Trump administration was forced to issue its statement on Saturday after reports emerged from ministerial talks in Montreal, involving more than 30 countries and held in preparation for the next UN climate summit, in Bonn in November.

Citing the European Union climate commissioner, Miguel Canete, the Wall Street Journal reported that Trump officials had said they would not pull out of the Paris accord and were offering to re-engage.

McMaster said on ABC’s This Week it was possible the US would stay in the accord “if there’s an agreement that benefits the American people, certainly”.

“The president is open to any discussions that will help us improve the environment,” he said, “that will help ensure our energy security and will advance out prosperity and the prosperity of American businesses and American workers.”

The accord was reached in 2015, after many years of trying.

Negotiators cheered and wept as more than 200 countries including the US and China pledged to limit emissions from the burning of fossil fuels.

Tillerson said that according to Trump, “we are willing to work with partners if we can construct a set of terms that we believe is fair and balanced for the American people.”

He said the accord gave too much favour to China, but said the president was open to “finding the right conditions”.

The apparent switch to diplomacy from such prominent White House officials could signal that Trump is retreating from his hardline course on climate change, which he famously called “a hoax”.

Staying in the Paris would deal would also be another reversal on a signature policy issue.

In recent weeks, Trump has secured a deal with Democratic leaders over the debt ceiling and government funding and indicated he is open to working across the aisle on immigration.

Such moves are not popular with the hard-right Republican base that sustains a president with historically low approval ratings.

McMaster, who said the Paris accord “gave the biggest polluters a free ride,” said Trump had said the US would pull out of the accord but could re-enter if conditions were favourable.