‘We have to save Syria’s culture for all,’ says director of antiquities 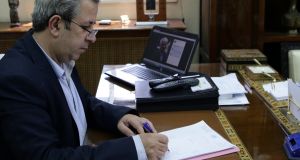 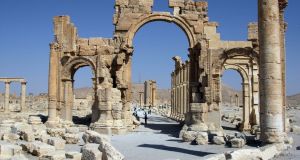 The Arch of Triumph among the Roman ruins of Palmyra, 220km northeast of Damascus, which Islamic State blew up in October 2015. Photograph: AFP/Getty Images

Syria’s director of antiquities is a worried man. On December 13th, a mortar struck the garden of the national museum and a second shell hit the adjacent domed buildings of the Ottoman compound, a jewel of 16th-century Turkish architecture and the best Ottoman shrine in Damascus.

“Fortunately, there is not much damage,” says Maamoun Abdulkarim.

The garden is filled with tombstones, sarcophagi, statuary and other ancient stone treasures, while the Ottoman structure is fragile and could collapse if hit by a missile. Unlike the museum, the garden is still open to visitors.

Abdulkarim’s nightmare is the fighting and chaos in Damascus. The museum’s galleries have been evacuated and its artefacts have been stored in places considered secure, while 300,000 objects have been brought to the capital from provincial museums and sites.

“We opened all the safe places in [the northwestern province of] Idlib and saved the Syro-Mesopotamian history. We brought the collection from Deir al-Zor [occupied by Islamic State],” says Abdulkarim.

While destructive of Syria’s cultural heritage, the crisis has, however, provided “an excellent opportunity for documenting the collection. During 2014-15 we have photographed 250,000 items for the archive.”

‘Can we save Palmyra?’

Abdulkarim told the gathering that the archaeological marvels of Palmyra are well documented and can be recreated with the original, or similiar, stones. It is also possible, using 3D printers, to recreate the structures with other materials, he says.

“If we can save Palmyra, we can save civilisation,” he says. “We will show the terrorists we will rebuild the Temple of Bel [in Palmyra] and the Omayyad mosque in Aleppo – its stones have not been exploded.”

He argues that it is essential to protect Syrian cultural heritage as well as Syrian lives, so as to preserve “the memory of the Syrian people – we have to save our culture for our children and all humanity”.

The struggle to preserve that heritage involves not only preventing the destruction of sites and the contents of museums, but also halting looting, smuggling and trade on the art and antiquities black market. Smugglers and tomb robbers who have operated freely in Iraq since the 2003 US occupation are now in Syria, Abdulkarim says. He and his colleagues “keep in touch with Unesco”, Interpol and other agencies tracking looted artefacts.

For example, it should be possible, he says, to track down 527 objects stolen by Islamic State from the Central Bank of Raqqa, where they were placed for safekeeping, and 1,000 antique arms and weapons from the folklore museum at Deir Atieh. “We have all the documentation . . . We are waiting for the international community to implement UN Security Council resolution 2199, which was adopted under chapter seven [of the UN charter which deals with threats to peace] and should provide protection for Syrian and Iraqi antiquities.”

He says he has “no information from Turkey”, where 2,000 items have been intercepted. Jordan has stopped cooperating for political reasons.

“Politics must not be confused with heritage,” he says. “Even if they refuse to repatriate objects to the Syrian government, they should prepare and share data.”

Abdulkarim, who has been in the job since 2012, has been criticised by Damascus’s opponents for accepting a government appointment.

“I do not take one Syrian pound for this job,” he says. “I have my salary as a professor.”

He works at Damascus University, but he and the department’s employees see their jobs as duty.

His daughter, six years old when the war began, was terrified by explosions and the sight of fighting, and wanted to leave Syria. “It was a very difficult decision. My father saw his parents killed in 1918 – my father is Armenian and mother Kurdish. I told my daughter that I would be condemned if I leave. She agreed we should stay.”