Trump’s shift on Syria to strengthen hand of Assad

US moves in line with Moscow aim of defeating Isis, rather than removing president 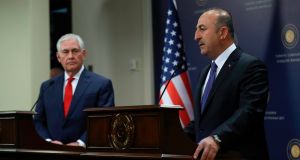 US president Donald Trump has delivered on a campaign pledge by instructing the US military to focus on defeating Islamic State rather than toppling Syrian president Bashar al-Assad.

He made his position clear last October when he spoke favourably of Assad, Russia and Iran because they are “killing Isis”, suggesting the US should join forces with those fighting the terror group. Islamic State is also known as Isis, or Daesh.

Former US president Barack Obama called for Assad to stand down in August 2011, six months after unrest erupted in Syria, and remained committed to this demand until he left office.

Trump’s instruction to the Pentagon was preceded by a statement made by US secretary of state Rex Tillerson, who broke with Obama administration policy by saying Assad’s future “will be decided by the Syrian people” rather than external powers.

This is the position of Russia and of Assad himself. Moscow has denied it will support Assad indefinitely, while he has said that once there is a political settlement involving transition from Baath party rule to a multi-party system and elections, he would stand down if this was the wish of the Syrian people.

US ambassador to the UN Nikki Haley reinforced Tillerson’s line when she said the US would no longer focus on “getting Assad out”.

Tillerson made his statement in Ankara on Thursday following discussions with Turkish president Recep Tayyip Erdogan, the first world leader to call for Assad’s ousting. Tillerson’s intervention came at a time Washington and Ankara are at odds over the conduct of the campaign to drive Islamic State from its capital at Raqqa in northern Syria.

Erdogan has called for a role for Turkey’s surrogate Syrian militia while the US has deployed the Syrian Democratic Forces, dominated by Syrian Kurds regarded by Turkey as “terrorists” due to their connections with Turkish Kurdish separatists.

Trump’s shift came as the fifth round of the UN-brokered intra-Syrian talks in Geneva ended. The focus on Islamic State could, in the coming round, strengthen the hand of the Syrian government, which argues Assad must remain through the transition period and can stand for re-election.

The Saudi-supported opposition High Negotiations Committee (HNC) has responded by reiterating its long-standing demand for Assad’s removal and prosecution for war crimes. The HNC’s opposition partners, the Moscow and Cairo platforms, do not agree and call for compromise over his status.

The HNC fears if elections are called Assad could stand and be re-elected. This was the opinion of former UN mediator Lakhdar Brahimi in mid-2013 and continues to be the view of an expatriate Syrian civil society activist involved in planning for Syria’s future. He told The Irish Times, “We have gamed the election and found Assad will win” in a UN-conducted free and fair poll.

The US military will welcome the focus on the offensive by US-supported Democratic Forces in the Raqqa campaign. However, Saudi Arabia, the HNC’s sponsor, and Qatar, are unlikely to agree. They have been the main providers of funds and arms to anti-Assad jihadi militias which have lost ground to the Syrian army in recent months.