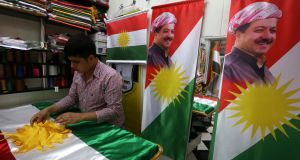 Iraqi Kurds will hold an independence referendum on September 25th, according to the president of Iraq’s autonomous Kurdish region Masoud Barzani.

Hamin Hawrami, a senior presidential adviser, said on his own Twitter account that the decision follows a meeting of the major Kurdish political parties in Irbil, the region’s capital.

Iraq’s Kurdish region, with a population of about 5 million, already enjoys a high degree of autonomy, including its own parliament and armed forces.

However, relations with the central government in Baghdad have nosedived in recent years over a range of issues.

Iraqi prime minister Haider al-Abadi said in April he respects the Kurdish right to vote on independence, but he did not think the timing was right for the move.