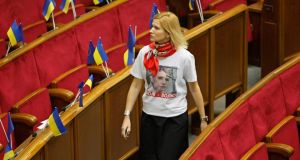 It’s a long way from Lviv to Kharkiv: more than 1,000km across Ukraine, from close to its western border with Poland to within a few miles of Russia in the east.

It took Olha Detchok two days to make the journey, riding on the spartan and grindingly slow local “elektrichka” trains that are free for pensioners like her. She spent two nights at railway stations, and changed trains eight times. “It’s important to be here,” says the diminutive Detchok, a headscarf framing her ruddy cheeks and bright eyes. “It’s important for Ukraine to have a normal leader and not a bandit.”

She is standing outside a Kharkiv hospital with a group of like-minded women who have come from around Ukraine to show solidarity with the convicted criminal who has now spent 18 months behind the permanently covered windows of a top-floor room.

Yulia Tymoshenko, Ukraine’s former prime minister, was transferred here in spring 2012 from prison where she was serving a seven-year sentence for abuse of office. “I told the other “elektrichka” passengers what is happening here”, says Detchok of her journey. “I told them it was a disgrace that Yulia is a prisoner. I supported her during the revolution and I support her now.”

Tempestuous relationship
Tymoshenko (52) helped lead the 2004 Orange Revolution, which sought to free Ukraine from Russia’s grip and move it closer to the European Union and United States. Inspired by her fiery speeches, Ukrainians came out in huge numbers to denounce fraudulent election results that gave victory to a Moscow-friendly politician, Viktor Yanukovich.

The vote was duly annulled, then repeated. And Viktor Yushchenko became president, before making Tymoshenko his premier. Their partnership, however, proved disastrous. By 2010, support for the bumbling Yushchenko had crumbled, and the resurgent Yanukovich narrowly defeated Tymoshenko in a broadly free and fair presidential election.

In October 2011, she was jailed for agreeing a gas deal with Russia which prosecutors say was ruinously expensive for Ukraine. Her supporters, and the EU and US, say she is the main victim of politically motivated legal attacks against opponents of Yanukovich. And if she is not released before a summit at the end of this month, the EU is likely to scrap plans to sign political and free trade deals with Ukraine, casting relations between Brussels and Kiev into limbo.

“We call up to her window: ‘We love you! We are with you! Freedom for Yulia!’ ” says Tamara Yakovenko, from Kharkiv. But they never see Tymoshenko, who is confined to bed with back problems which, she insists, cannot be treated properly in her homeland. “Yulia has great charisma . . . If she were president we would be a proper developed country,” adds Natalya Lokareva, from Kirovograd in central Ukraine. “We just hope they will free her. If not, the EU will turn away from us and we will be stuck under Russia.”

The women are clustered at the hospital gates in a little camp, with flags and a tent provided by Tymoshenko’s party. The former prime minister’s party also helps pay for their accommodation in Kharkiv. Visitors to the hospital don’t pay them much attention.

Kharkiv, like most of eastern Ukraine, has never been enamoured of Tymoshenko, whose power base is in the west, around Lviv.

“Why should she get special treatment?” asks Vladimir, a businessman who declines to give his last name. “We are ruining relations with Russia just to get some promise from the EU which may never amount to anything. It’s not right.”

Desperate for EU deal
Another local man, hurrying to work past a statue of Vladimir Lenin on Kharkiv’s vast main square, doesn’t even stop to give his opinion of Tymoshenko: “She’s a thief, the ‘gas princess’. A thief,” he says, without breaking stride. “She should sit in jail like all thieves.”

Tymoshenko was dubbed the “gas princess” when making what is believed to be a fortune as the head of a major energy firm in the 1990s. This assumed wealth, and her determination to break with Moscow, makes her particularly unpopular in Russian-speaking eastern Ukraine – Yanukovich’s birthplace and stronghold.

The EU wants Ukraine to resolve Tymoshenko’s case this week, but her allies say Yanukovich may fear her too much to set her free. Polls suggest most of Ukraine’s 46 million people want to move closer to the EU, but many are angry that everything now appears to hinge on the fate of the former prime minister.

“As a Ukrainian, I strongly believe it’s not fair,” says deputy foreign minister Andriy Olefirov. “But I don’t care about Tymoshenko – I need this agreement with the EU.”