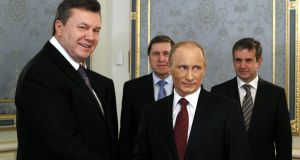 Ukrainian prosecutors have said they will seek a life sentence for former president Viktor Yanukovich, who went on trial in absentia for treason on Thursday.

Mr Yanukovich is also accused of violating Ukraine’s sovereignty and territorial integrity and aiding Russian aggression against the country, after he fled to Russia to escape mass protests against his rule in February 2014.

Prosecutors say that in March 2014 Mr Yanukovich appealed to the Kremlin to send troops to Ukraine, just as Russian forces were seizing control of Crimea and starting covert efforts to spark a separatist conflict in eastern Ukraine. That war has since killed some 10,000 people and displaced about 1.5 million.

Mr Yanukovich has denied all wrongdoing, but Ukraine accuses him of crimes ranging from massive corruption to responsibility for the murder of about 100 protesters allegedly killed by the security forces in central Kiev in February 2014.

“During the pre-trial investigation period the accused suspect Yanukovich did not admit his guilt, so the prosecution will request the strongest punishment - life imprisonment,” said prosecutor Ruslan Kravchenko.

“When he was in Russia, [Yanukovich] prepared and sent a letter to the president of the Russian Federation [Vladimir] Putin, asking for the use of the Russian armed forces in Ukraine,” he added.

“As everyone knows – the whole international community – the result of this letter was Russia, the aggressor country, using its forces on the territory of our state, and in Crimea . . . occupying our territory.”

On March 3rd, 2014, the then Russian envoy to the United Nations, Vitaly Churkin, showed a letter to the UN Security Council which he said was a direct appeal from Mr Yanukovich to Mr Putin dated two days earlier.

“The country has plunged into chaos and anarchy . . . The country is in the grip of outright terror and violence driven by the West,” Mr Churkin quoted the letter as saying.

“I appeal to the president of Russia Vladimir V. Putin to use the armed forces of the Russian Federation to re-establish the rule of law, peace, order, stability and to protect the people of Ukraine.”

Mr Putin later referred to the appeal as justification for his actions in Ukraine, but in a bizarre twist following Mr Churkin’s death this February, the Kremlin denied ever receiving such a letter, and Moscow’s foreign ministry claimed Mr Yanukovich had actually made the request in a statement.

This March, Denis Voronenkov, a former Russian deputy who fled to Ukraine and offered to testify against Mr Yanukovich, was shot dead in central Kiev; who ordered the killing is not known.

On Thursday, a Kiev district court ruled that Mr Yanukovich should give evidence from Russia by video link, and his trial was adjourned until May 18th.

Committee chairperson roles: Who is in line for what?

1 Ireland’s official coronavirus death toll likely to have been overstated, report finds
2 Bobby Storey: The IRA's planner and enforcer who stayed in the shadows
3 The abrupt end to Brexit talks is not only surprising but perplexing
4 Tributes paid to 'patriot' Tony Holohan as he steps back from CMO role
5 Fine Gael's Dara Murphy leaves EU job after just seven months
Real news has value SUBSCRIBE