Mayor says all tourists on Madeira bus were German; unclear if locals are among dead 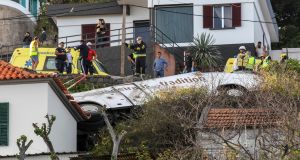 A bus carrying tourists in Madeira has crashed killing 28 people, an official has said.

He said most of those on board were German tourists, and it has not yet been confirmed whether any other nationalities were involved.

The Irish Department of Foreign Affairs said it is aware of the case and stands ready to offer assistance, but so far it is not thought that Irish persons are involved in the crash.

The bus was carrying 55 people when it veered off a road on a bend east of the capital, Funchal, before rolling down a steep hillside on Wednesday, Mr Sousa said.

Authorities said they are investigating the cause. Local residents said the weather was fine at the time of the incident, which happened while it was still light, in the early evening.

“I have no words to describe what happened. I cannot face the suffering of these people,” Mr Sousa told SIC TV. It was his information that all the tourists on the bus were German.

It was not clear whether all of the dead had been travelling on the bus. Another 22 people were injured in the incident, near Caniço town, according to Lusa.

The driver lost control at a junction and went off the road, reports added. Portuguese media showed the overturned vehicle had come to rest off an embankment near housing.

Lusa news agency reported that Portuguese president Marcelo Rebelo de Sousa was flying to the island to visit the scene.

A British Foreign and Commonwealth Office spokesman said: “We are seeking information from the authorities in Portugal about a bus crash in Madeira, and are ready to support any British people who require assistance.” – Agencies