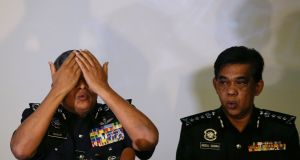 Two women suspected of poisoning the estranged brother of North Korean leader Kim Jong-un were trained killers who coated their hands with a toxic substance and wiped it on his face, Malaysia’s police chief said.

Malaysian police are also seeking a North Korean diplomat in relation to the suspected assassination of Kim Jong-nam, which is threatening to lose North Korea one of its few remaining friends in the region.

“Yes, the two female suspects knew that the substance they had were toxic. We don’t know what kind of chemical was used,” police chief Khalid Abu Bakar told reporters at a news conference in Kuala Lumpur.

Kim Jong-nam (46) the eldest son of late former leader Kim Jong-il, was killed at Kuala Lumpur airport on February 13th as he was about to leave for Macau, a Chinese territory where he had protection.

Mr Khalid identified the diplomat as Hyong Kwang-song (44) a second secretary at the North Korean Embassy in Kuala Lumpur. The other suspect was Kim Uk-il (37) who works for North Korea’s national flag carrier Air Koryo.

“We submitted the request (to the embassy) today,” he said. “If they refuse to co-operate, then we will issue warrants of arrest on both of them.”

South Korean intelligence believes the North Koreans carried out the assassination to eliminate Kim Jong-nam, who as older brother could be a possible successor to Kim Jong-un, even though he lived in exile and had distanced himself from the domestic politics of North Korea.

The Inspector General rejected earlier speculation the women had thought they were part of a prank.

“Our investigations also revealed that the two female suspects detained in connection with the murder of Kim Jong-nam knew exactly what they were doing,” he said.

The women had rehearsed the attack at the KLCC and Pavilion shopping malls in central Kuala Lumpur before carrying it out on Kim Jong-nam, he continued.

Malaysia has so far identified eight North Koreans suspected of being linked to the killing. One is in custody, along with two women - one Vietnamese and one Indonesian - believed to have carried out the fatal assault using what seems to have been a fast-acting poison.

CCTV footage showed the Indonesian woman, Siti Aishah, wiping it on him first and the Vietnamese woman Doan Thi Huong followed, he said.

“You can see from the CCTV footage that one of the suspects walked with her hands extended to the bathroom to wash off the substance,” he said, adding that they were not wearing gloves.

Mr Khalid said police “strongly believed” four other North Koreans were “heavily involved” in the attack and were now back in the North Korean capital of Pyongyang, having fled Malaysia on the day of the attack.

Since the attack, relations between the two countries have nose-dived.

Malaysia has denied North Korea’s request for the body to be handed over to its embassy directly, and the North Koreans have accused the Malaysians of being not competent to carry out the investigation.

The Malaysians have recalled their ambassador to Pyongyang and prime minister Najib Razak criticised the North Korea ambassador in Kuala Lumpur for making “diplomatically rude” remarks.

There were reports of an attempted break-in at the mortuary where Kim Jong-nam’s body is being held and police have stepped up security there.

The police said no family members have come forward to identify or provide DNA samples yet.