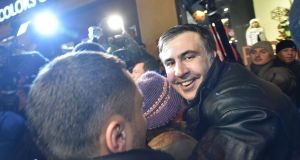 Former Georgian president Mikheil Saakashvili is planning new protest rallies in Ukraine following his release from custody, and wants the West to put more pressure on Kiev’s leaders to accelerate reforms and fight corruption in the country.

On Monday, a Kiev court rejected a request from prosecutors to place Mr Saakashvili under house arrest, but he still faces allegations of plotting with a pro-Russian oligarch to seize power in Ukraine through street demonstrations.

Mr Saakashvili woke up on Tuesday in the same Kiev flat from which he tried to flee security service agents a week earlier, only to be caught on the rooftop. Protesters subsequently pulled him from a police van, however, and he remained at liberty until he was seized in a supporter’s apartment last Friday night.

The leader of Georgia’s 2003 Rose Revolution was then placed in a detention centre, where he went on hunger strike. Several thousand people marched through Kiev last Sunday to demand his release and denounce Ukraine’s rulers for failing to fight rampant graft.

“There will be another rally this Sunday,” Mr Saakashvili told The Irish Times.

“The plan is that people go out every Sunday . . . to show their discontent with the absence of change and to demand change. We don’t want destabilisation or clashes or provocations, so it’s happening in daylight on the main streets of Kiev.”

Ukrainian prosecutor general Yuriy Lutsenko vowed to appeal against the decision not to place Mr Saakashvili under house arrest over the allegations, and complained of coming under “colossal pressure to close my eyes” to the alleged actions of the former Georgian leader.

“I think the case is collapsing now solely because of politicisation,” Mr Lutsenko said, while insisting that he had evidence to prove that Mr Saakashvili was part of a conspiracy involving Moscow’s FSB security services and allies of former Ukrainian president Viktor Yanukovich, who fled to Russia during a 2014 revolution.

“A state that cannot defend itself from the plans of the FSB and Yanukovich’s gang is doomed to collapse,” Mr Lutsenko added.

Critics of Mr Lutsenko and his close ally, Ukrainian president and billionaire businessman Petro Poroshenko, accuse them of betraying the “Maidan” revolution by turning a blind eye to rampant corruption and protecting wealthy “oligarchs” who wield huge political power.

Last week, the European Union, United States and International Monetary Fund – which are helping Ukraine survive economic turmoil and conflict with Russia – criticised Kiev’s leaders for their half-hearted fight against graft and interference in the work of the new national anti-corruption bureau (Nabu).

“Lutsenko should resign not only because of my case but his attack on Nabu,” said Mr Saakashvili, who also faces possible extradition to his native Georgia to answer charges there.

“Poroshenko should just change everything. I’m not calling expressly for his resignation now . . . but he should leave Nabu alone and stop political repressions,” he added.

“The West should ask Ukraine to stop this absolute illegality towards me and my supporters . . . and help expose [the Ukrainian elite’s] corruption . . . go after their bank accounts and offshores and force them to be transparent.”