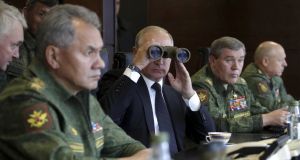 Russian president Vladimir Putin watched his country’s military take part in the major “Zapad” war games on Monday, amid continuing concern from Nato states over the real size and purpose of the exercises.

At around the same time in southern Russia, a nuclear-capable Iskander-M missile was fired at a target some 480km away in Kazakhstan. The same rockets are deployed in Kaliningrad, a Russian exclave on the Baltic Sea between Poland and Lithuania.

Russia and Belarus insist that Zapad – “west” in Russian – is purely defensive and is not aimed at any particular country, although its notional insurgents are based in areas that correspond to western Belarus, Poland and Lithuania.

Several Nato states have questioned Moscow’s claim that fewer than 13,000 troops will be involved, with some predicting the involvement of 100,000 troops.

Nato has also urged Russia and Belarus to let more observers monitor the drills for longer periods, to help calm fears stoked by Moscow’s invasions of Georgia in 2008 and Ukraine in 2014, both of which followed large military exercises.

Monitors and reporters were allowed to watch part of the war games on Monday, and Mr Shoigu told Mr Putin that 95 foreign observers were present.

Andrei Kartapolov, the head of forces in Russia’s western military district, said “the supreme commander and the defence minister gave a high assessment” of what they saw on the mock battlefield in the Leningrad region.

“The scope of today’s stage [of drills] was large, along a front of some 600km; the forces simultaneously fulfilled their task on three firing ranges,” he added.

Russia accuses the West of whipping up fear around Zapad to justify Nato’s recent deployment of reinforcements to the three Baltic states and Poland and the ramping up of its own war games in central and eastern Europe.

“[The] simulation of a real conflict with Nato member countries, the concealed scope and scenarios of the exercise, the deployment of soldiers and tactical weapons . . . speak about the aggressive and offensive nature of Zapad,” she said.

“The effects of capacities of nuclear weapons, artillery and missiles mobilised in Kaliningrad may reach even Lisbon.”

Coronavirus: Global deaths near 1m as Melbourne hopes for move to ‘Covid normal’ by Christmas 11:42
Donald Trump's taxes: US president paid $750 federal income tax the year he won the election 09:52
Trump paid no federal income taxes in 10 of past 15 years – report 23:21
Swiss voters dismiss proposal to stop free movement of people from EU 21:15
Sixteen killed as fighting erupts between Azerbaijan and Armenia 20:04