US decries ‘new stain’ on UN, 20 years after its peacekeepers abandoned Srebrenica 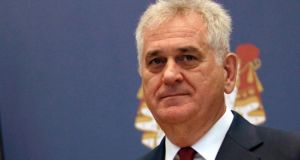 Serbian president Tomislav Nikolic: “This is a great day for Serbia . . . Russia today showed and proved that it has been a real and honest friend.” Photograph: Koca Sulejmanovic/EPA

Russia has blocked a United Nations draft resolution condemning the July 1995 Srebrenica massacre as a genocide, after Serbia denounced a declaration that it said would leave an indelible stain on the Serb people.

The text proposed by Britain described as “genocide” the murder of more than 8,000 Bosnian Muslims by Bosnian Serb soldiers. Genocide is used by the UN tribunal for former Yugoslavia and the International Court of Justice to describe the massacre.

Leaders of Serbia and the Bosnian Serbs reject that description of Europe’s worst massacre since the second World War, however, and urged Moscow to block the resolution ahead of Saturday’s 20th anniversary of the start of the killings.

The diplomatic dispute will only fuel rancour between Bosnian Muslims and Serbs ahead of the commemoration events and highlight deep divisions between Russia and western powers caused by their opposing positions on the Ukraine crisis. It will also complicate a Balkan tour by German chancellor Angela Merkel, who was due to arrive in Serbia last night for talks with the country’s leaders and to travel to Bosnia this afternoon.

Russia’s ambassador to the UN, Vitaly Churkin, said the draft resolution was “confrontational and politically motivated” and unfairly condemned Bosnian Serbs for atrocities while ignoring crimes committed by Bosnian Muslims and Croats. “The draft that we have in front of us will not help peace in the Balkans but rather doom this region to tension,” Mr Churkin claimed, while insisting that Russia was not “deaf to the suffering of the victims of Srebrenica and other areas of Bosnia”.

Russia was the only country on the 15-member council to veto the text; 10 states supported it and China, Nigeria, Angola and Venezuela abstained.

In a statement shortly after the vote, Serbian president Tomislav Nikolic was jubilant. “This is a great day for Serbia,” he said. “Not only was the stigmatisation of the entire Serbian people as genocidal prevented, but Russia today showed and proved that it has been a real and honest friend.”

Britain’s deputy ambassador to the UN, Peter Wilson, said he was “outraged” by Moscow’s veto. “Russia’s actions tarnish the memory of all those who died in the Srebrenica genocide. Russia will have to justify its behaviour to the [victims’] families.”

The United States said the veto was “a new stain” on the reputation of the UN, which in 1993 declared Srebrenica to be a “safe haven” from Bosnian Muslims fleeing rampaging Bosnian Serb forces led by Ratko Mladic.

The 400 or so Dutch peacekeepers in Srebrenica 20 years ago were massively outnumbered by Gen Ratko Mladic’s troops, however, and the UN’s political and military chiefs failed to take decisive action to protect the Muslim enclave.Gen Mladic and his wartime political ally Radovan Karadzic are now being tried for genocide at the UN court at The Hague.

Serbian prime minister Aleksandar Vucic has called the massacre a “terrible crime” and has offered to attend Saturday’s memorial in Srebrenica.