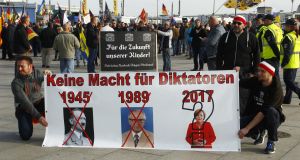 Protesters hold a placard with right-wing slogans against the government: Germany faces federal elections in September and pressure on the refugee situation is building. Photograph: Michele Tantussi/Getty Images

The 102-page document reads like a typical consultants’ report for a struggling organisation seeking to reduce its head count. About 200,000 departures should be achieved this year, McKinsey writes, with an additional 300,000 possible with an attractive financial package.

What sounds like just another corporate blood-letting is in fact the controversial blueprint to master stage two of Germany’s refugee crisis.

Stage one came in 2015: 890,000 people from Syria, Afghanistan and a series of African countries arrived here to file for asylum. Germans surprised the world – and themselves – with their spontaneous welcome. Armies of helping hands in Munich and elsewhere flashed around the world.

Two years on, Germany’s public mood has moved from euphoria to wounded pride, regret and, in some quarters, open xenophobia. Germany hoped for assistance from other EU countries but, apart from Austria and Sweden, that help never came. The mood cooled further after a series of vicious attacks last year, some involving asylum seekers, and culminating in the Berlin Christmas market attack by a Tunisian man with Islamic State links.

Statistics show that Germany’s natives are a greater threat to new arrivals than vice versa, with an average of 10 attacks a day on asylum seekers and their hostels last year. But, six months before the federal election here, perceptions are changing Germany’s asylum reality, and chancellor Angela Merkel’s politics.

Ever the cool pragmatist, Merkel has mothballed her “we can manage this” mantra of 2015. Instead new arrivals have been throttled and efforts are underway to reduce the asylum backlog.

But two years after the refugee crisis peaked, asylum agencies fear that election calendar expediency is driving the deportation of people Germany could use, while allowing less savoury new arrivals to vanish into the cracks.

Afghan man Rahmat Kahn arrived in Germany in 2010, seeking asylum from the Taliban who he said killed his father. The young man found an apartment, learned German, volunteered in a Catholic youth club and found work as a trainee stone mason.

His boss Thomas Monzel described the 22-year-old as a “gift from God”, who showed up for work with the flu unlike German trainees who vanished at the first sign of muscle strain.

On December 14th, at 5am, police rang Kahn’s bell, brought him to Frankfurt airport and flew him back to Afghanistan.

Berlin defends its new deportation push as a crucial part of the asylum process, ensuring that limited resources are available for asylum seekers in need. In private, however, migration officials concede that existing rules leave little room to consider, as part of their asylum decision, how an applicant has adapted to life here.

Asylum rules preclude Berlin from returning people to instable regions or warzones. Berlin insists Afghanistan has “some” safe regions, but Germany’s constitutional court disagrees. It has stopped several deportations to Afghanistan, noting that “the military situation changes there daily”.

Several federal states have refused to join the deportation push and, on Friday in the Bundesrat upper house, they blocked plans to throttle asylum applications from northern African countries.

From the so-called Maghreb countries to the Middle East, critics of Berlin’s asylum policy believe the priority now is not individual circumstances, but how quickly a file can be closed.

Maryam, a 29-year-old Christian woman, fled Iraq after armed men burst into her home and threatened her and her family. Now living in Brandenburg near Berlin, she learned German in two years and hoped to study dentistry – until two weeks ago when her asylum application was rejected.

“They said her application was not credible and she had to leave the country within the week,” says Prof Margot Kässmann, a leading Lutheran theologian and pastor, and friend of Maryam. “To deport a Christian to Iran, where Christians cannot live freely, I find inconceivable let alone a young, single Christian woman.”

The tragedy, she says, is that model asylum seekers such as Maryam, who play by the rules, are easier to find and deport than more devious asylum seekers such as Anis Amri. The Christmas market attacker arrived in 2015, adopted over a dozen aliases, lived on the move and under the radar, and avoided deportation despite a failed asylum application and being flagged as an Islamist threat.

Migration officials deny they are going after low-hanging fruit but, unofficially, admit growing political pressure for results. Between 2014 and 2016, deportations and voluntary returns jumped 70 per cent to almost 80,000. But last year’s total comprises less than a tenth of the 2015 asylum applications spike, while estimated total asylum costs for 2016 have jumped 40 per cent to €23 billion.

To get a handle on these numbers, Germany will on Monday open a new agency to optimise deportations further, as recommended in the McKinsey report. The consultants’ reported bill: €1.8 million.