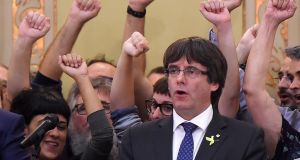 Carles Puigdemont: his choice of Jordi Sànchez as an alternative candidate is likely to be contentious. Photograph: Josep Lago/AFP/Getty

Carles Puigdemont’s announcement on Thursday that he would step aside and allow another candidate to attempt to become Catalan president has brought to a close yet another chapter of Spain’s territorial impasse. But the crisis is far from resolved.

Ten weeks after the Catalan election which saw pro-independence parties clinch a majority in the regional parliament, Puigdemont was admitting what had long seemed inevitable: that his status as a fugitive from the Spanish justice system meant he would not be able to lead a new government.

“Madrid will now have no excuse to continue with its policy of occupation, or to continue ignoring our voice or impose a colonial vision on our future,” Puigdemont said after announcing his withdrawal.

He was speaking in Brussels, where he has been living since the Spanish government introduced direct rule in Catalonia in late October, sacking Puigdemont as regional president.

Initially, he had vowed to be restored as president, but the constitutional court ruled that he could not be sworn in from afar. In late January, text messages sent by Puigdemont to a colleague showed him admitting that his bid to return as president had “come to an end”.

But Puigdemont’s choice as an alternative candidate, Jordi Sànchez, is likely to be almost as contentious. A leading figure in the rank-and-file independence movement, Sànchez has been in jail since October, awaiting trial for sedition, rebellion and misuse of public funds for his role in the autumn’s failed secessionist drive. In order to be sworn in, he would require special leave from the supreme court, which appears unlikely. Even then, he would face the logistical challenges of governing 7.5 million Catalans from behind bars.

Puigdemont and his Together for Catalonia (JxCAT) coalition “know perfectly well that this candidacy is not going to work out”, said Oriol Bartomeus, a political scientist at Barcelona’s Autonomous University (UAB).

“The choice of Jordi Sànchez is designed to keep alive the conflict with the Spanish state,” he said.

Pro-independence Catalans have presented Sànchez and three other jailed secessionists as martyrs and political prisoners, supposedly incarcerated for their beliefs rather than their crimes.

But Sànchez’s nomination threatens to exacerbate existing tensions in the independence movement. JxCAT was already at odds with its main fellow pro-independence party, the Catalan Republican Left (ERC), over Puigdemont’s bid to govern from Brussels, which the latter saw as unrealistic.

Sànchez is a JxCAT member of parliament and ERC believes the more logical candidate for president is Oriol Junqueras, its own leader, also jailed, who was vice-president under Puigdemont.

“In terms of legitimacy, if the candidate isn’t Puigdemont, it would have to be Oriol Junqueras,” ERC spokesman Sergi Sabrià said on Friday.

Despite its internal wrangles, the independence movement continues to attempt to place the Catalan issue on the international agenda. On Friday, a lawyer representing Puigdemont unveiled a legal complaint being presented to the United Nations human rights committee, claiming Spain had violated his right to political expression and participation.

So far, formal international support for the independence cause has been scant and this latest move by Puigdemont is unlikely to worry a Spanish government that believes its domestic laws and courts are more than capable of managing the Catalan situation.

However, pressure for Spain to alter its approach is also being exerted closer to home. The Basque Nationalist Party (PNV), a key parliamentary ally of Rajoy’s PP, is dismayed at Madrid’s use of direct rule and has said that the measure must be lifted before it puts its support behind the 2018 budget, which is yet to be approved. Given those circumstances, the formation of a new Catalan government is in the interests of both parties in this conflict.