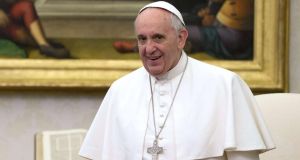 On the eve of the first plenary session of the Vatican’s Pontifical Commission for the Protection of Minors, Pope Francis yesterday sought to boost its work by calling for “close and complete co-operation” from “the church at every level”.

The commission, of which Irish victim Marie Collins is a member, opens a three-day meeting in the Vatican this morning.

In a letter to bishops’ conferences and to the heads of religious orders, the pope suggested that the commission can become “a new, important and effective means” in dealing with all aspects of the problem of clerical sex abuse.

Reaffirming the church’s commitment to ensuring the protection of minors, the pope was also critical of those clerics whose initial reaction to a sex abuse incident had been “the desire to avoid scandal”, saying: “Families need to know that the church is making every effort to protect their children. They should also know that they have every right to turn to the church with full confidence, for it is a safe and secure home . . . There is absolutely no place in ministry for those who abuse minors.”

Recalling how he had met with six victims last July, the pope wrote that he had been “deeply moved” by their sufferings. His meetings with the survivors reaffirmed his “conviction that everything possible must be done to rid the church of the scourge of the sexual abuse of minors”.

In the context of a slow-moving Holy See where, even now after more than a decade of clerical sex abuse scandals, not everyone is on the same page on the issue, the pope’s letter is an obvious attempt to strengthen the commission’s role and impact.