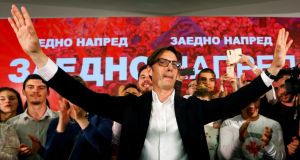 The European Union has welcomed the election of Stevo Pendarovski as president of North Macedonia, the recently renamed Balkan state that hopes to start accession talks with the bloc next month.

Mr Pendarovski, the government-backed candidate, secured 51.7 per cent of votes in Sunday’s run-off to defeat Gordana Siljanovska Davkova, who was supported by the opposition nationalist party VMRO-DPMNE and took 44.7 per cent.

The result was a relief for the ruling Social Democrat-led coalition of prime minister Zoran Zaev, who had warned that he might seek snap parliamentary elections if Ms Siljanovska Davkova won or turnout failed to reach the 40 per cent threshold required for the vote to be valid. Final turnout was 46.7 per cent.

The key campaign issue was a historic deal to change the country’s constitutional name from Macedonia to North Macedonia, which Mr Zaev’s government signed with Greece last year to applause from the EU, US and Nato.

Ms Siljanovska Davkova criticised an agreement that still faces strong opposition from nationalists in North Macedonia and Greece, and victory for her could have fuelled doubts about the long-term sustainability of the accord.

For almost 30 years Athens complained that its neighbour’s use of “Macedonia” implied a claim to a region of northern Greece with the same name, and in response it blocked the ex-Yugoslav republic’s bid for EU and Nato membership.

Greece has now lifted that veto, allowing North Macedonia to sign a Nato accession protocol in February – which is currently being ratified by all the alliance’s members – and to push for the launch of EU membership talks next month.

“Congratulations to Stevo Pendarovski on his election as president of the Republic of North Macedonia,” EU enlargement commissioner Johannes Hahn wrote on Twitter. “I look forward to the continued co-operation on the EU reform agenda ... setting the path towards opening accession negotiations in June.”

Mr Pendarovski (55), who served previous presidents as an adviser on national security and foreign policy, called his triumph “a victory for unity” in a country of two million people that includes a large ethnic Albanian minority.

“This is a victory for all who are convinced that we have to continue forward together, and I promise I’ll serve all the people equally,” he declared.

“The result from this presidential election means the guaranteed move as a country for membership of Nato and the EU, together with economic development in a world where we belong,” he added.

Ms Siljanovska Davkova – who like Mr Pendarovski is a law professor – accepted defeat but said she was proud of her campaign and still believed the deal with Greece was flawed.

“I hope triumphalism will not rule … and I know one thing: with this, all the problems of Macedonia will not be resolved,” she said.

Mr Pendarovski is expected to take over on Sunday from current president Gjorge Ivanov, a nationalist opponent of the name change, who has sought to impede the reform programme of a coalition government that includes ethnic Albanian parties.