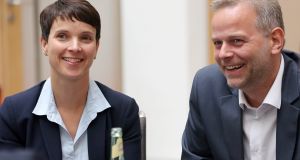 Frauke Petry, chairwoman of AfD, with party candidate Lief-Erik Holm: said the coalition partners were damaging themselves by refusing to listen to the public. Photograph: Wolfgang Kumm/EPA

Angela Merkel faces a political fight to win back support for her controversial refugee policy following the success of the anti-immigration right-wing Alternative for Germany (AfD) in regional elections on the chancellor’s home turf.

The German chancellor suffered a humiliating defeat on Sunday when the triumphant AfD pushed the chancellor’s centre-right Christian Democrats into third place in the vote in rural Mecklenburg-Vorpommern.

She faces renewed calls to change her refugee policy from both sides of her coalition – conservatives in her CDU/CSU bloc and her social democrat coalition partner.

But she will struggle to avoid the political shock of the Mecklenburg-Vorpommern result, which daily newspaper Bild described as the “Meck-Pomm horror”.

The result in the region where the chancellor has her parliamentary seat marks a new low in Ms Merkel’s struggle to retain public backing for her refugee policy. Protesting voters have abandoned the mainstream parties in droves and turned the AfD into Germany’s most successful right-wing party since the second World War.

The CDU’s share of the vote, meanwhile, fell from 23 per cent in 2011 to 19 per cent, its worst result yet in the state. The SPD fared somewhat better than had been predicted but still plunged from 35.6 per cent to 30.6 per cent.

AfD leader Frauke Petry said the coalition partners were damaging themselves by refusing to listen to the public. “Ms Merkel is bringing herself down,” she said. Copyright The Financial Times Limited 2016