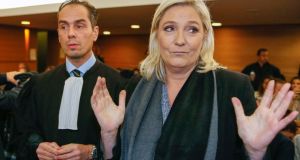 Marine Le Pen: If convicted she risks a fine, prison and disqualification from the 2017 presidential race. Photograph: Robert Pratta/Reuters

Marine Le Pen arrived half an hour early for her trial on charges of inciting religious hatred, jostled by a horde of photographers and cameramen, flanked by gum-chomping bodyguards.

The leader of the extreme right-wing National Front (FN) beamed as the trial opened. “I have committed no offence,” she said defiantly. The case allows Le Pen to play her favourite roles: that of brave politician who speaks on behalf of the “real” French – those who are horrified by what Le Pen calls the Muslim “invasion” – and of the truth-teller who scorns political correctness.

If convicted, Le Pen in theory risks a year in prison, a €45,000 fine and five years ineligibility for public office – which would eliminate her from the 2017 presidential race. Thirty-one per cent of respondents in a poll published on October 11th said they may vote for her. The verdict won’t be handed down until December 15th, but it’s unlikely she’ll be found guilty.

Le Pen leaned on the lectern before the judges’ bench and smirked at the civil plaintiffs: the International League against Racism and Anti-Semitism, the Movement against Racism and for Friendship Between Peoples, the French Council for the Muslim Faith (CFCM) and the Collective against Islamophobia in France.

Judge Gerard Gaucher read the quote that landed Le Pen in court, from a campaign speech for the presidency of the National Front in December 2010. (The case has taken five years to come to trial because the European Parliament first had to lift her immunity.)

“Fifteen years ago we had the headscarf. There were more and more of them. Then we had the burka . . .” Alluding to the overflow from makeshift mosques into the streets of a dozen French cities, Le Pen continued, “I’m sorry, but for those who like talking so much about the second World War, if we’re talking about occupation . . . It’s an occupation of pieces of territory, of neighbourhoods where religious law applies. Sure, there are no armoured vehicles, no soldiers, but it’s an occupation all the same and it weighs on the inhabitants.”

Le Pen insisted she was not comparing Muslim street prayers with the Nazi occupation of France. The National Front was in the process of choosing a new leader, following her father Jean-Marie’s 40-year presidency. Her rival for the post Bruno Gollnisch had, like her father, been prosecuted for inflammatory statements about the Holocaust. “I felt the past was no longer a concern of the French, that the new president should pay attention to current problems and not dwell on it. I was saying: if you want to talk about occupation, let’s talk about today’s occupation.”

Le Pen launched into one of her favourite, crowd-pleasing themes: “Through cowardice, the state refuses to apply the law . . . I am the spirit of resistance to what I consider abandonment by the state.”

It was her duty to denounce the self-appointed Muslim security services – not unlike the National Front’s toughs, one might think – who check identity papers and forbid journalists from photographing street prayers, Le Pen said.

Khadija Aoudia, lawyer for the CFCM, asked about Le Pen’s objection to the the veil and burka. “For me, the multiplication of veils and burkas is a political act, just like street prayers,” she replied. “I am not the only one who thinks so, since the government has banned veils in schools, and burkas and prayers in the streets.”

As Le Pen left the courtroom, pandemonium broke out. “We’re with you, Marine,” her supporters shouted. “France for the French.”

“Fascist!” others jeered. “Vive la France,” both sides screamed at each other.

A North African man with a handwritten placard cried out, “Marine Le Pen is dividing the country. We’re French and we have rights.”

A few metres away, a short, middle-aged woman with bleached hair and a ruddy complexion grew hysterical. “All these migrants who’re arriving,” she began her loud tirade. “You are dogs. You are barbarians. France gave you everything and you’re slashing our throats.”

A young Arab Frenchman was filming the outburst on a smartphone. “The true face of the FN,” he muttered.