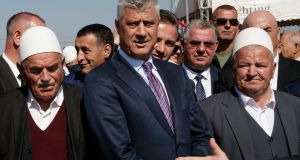 Hashim Thaci: special prosecutors at The Hague accused Kosovo’s president of involvement in multiple murders, torture, forced disappearance and other crimes during and after a 1998-9 war between Kosovar rebels and Serbian forces. Photograph: Valdrin Xhemaj/EPA

In his first public comments since being accused of war crimes, Kosovo’s president Hashim Thaci has said nobody can “rewrite the history” of his country, as his Serbian counterpart Aleksandar Vucic welcomed the indictment.

A meeting between the two leaders scheduled for Saturday at the White House was cancelled this week after special prosecutors at The Hague accused Mr Thaci of involvement in multiple murders, torture, forced disappearance and other crimes during and after a 1998-9 war between Kosovar rebels and Serbian forces.

A judge at the so-called Kosovo specialist chambers is considering whether to confirm the charges.

Mr Thaci, who was a political leader for the separatist Kosovo Liberation Army, has previously denied any wrongdoing, and on Friday he said he would address the nation on Sunday.

“Nobody can rewrite the history of Kosovo,” he wrote on social media.

“Sisters and brothers, dear friends...on Sunday evening I will address you from my office. I wish you a peaceful weekend and remain fully hopeful that better days for Kosovo and the Albanian nation are ahead. Forever yours, to the end, Hashim.”

Many Kosovars accuse the special court of wrongly investigating people who took up arms against often brutal Serbian troops in a war that killed about 13,000 people and displaced more than one million – the vast majority of them ethnic Albanians.

Serbia rejects the 2008 independence declaration of its former province, but the EU has told both states that they cannot join the bloc without resolving their dispute.

With EU-brokered talks in limbo after collapsing in late 2018, the US has taken the lead in what many analysts see as a push to secure a foreign policy “win” for president Donald Trump during this year’s re-election campaign.

The collapse of the planned White House summit hands the initiative back to the EU, however, and on Friday Mr Vucic held talks with top EU officials in Brussels, a day after Kosovo’s prime minister Avdullah Hoti did the same.

“We know that terrible crimes were committed against Serbs and it is good that there is justice for them, that is good news,” Mr Vucic said.

“But in everything else we must show restraint, and with that restraint we protect the Serbian people in Kosovo . . . from any violence and incidents and attacks. Because it is easy for us in Belgrade, but difficult for Serbs . . . in Kosovo.”

Mr Vucic added that he hoped EU-brokered talks between Serbia and Kosovo would resume soon, and that his country could join the bloc by 2026.