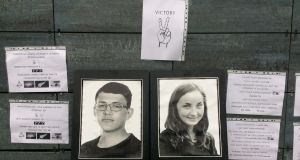 Slovak police have detained 13 judges as fallout from the investigation into the murder of journalist Jan Kuciak continues to shake the country’s establishment.

Masked police officers, some carrying guns, conducted dawn raids on Wednesday as part of an operation codenamed Storm, which led to the judges and five other suspects being held on suspicion of corruption, obstruction of justice and interference in the independence of the courts.

The operation was carried out by a special police unit that is investigating alleged links between Slovak judges and wealthy businessman Marian Kocner, who is on trial for ordering the murder of Kuciak, a reporter who was shot dead in February 2018 alongside his fiancee, Martina Kusnirova.

Kocner, who was sentenced to 19 years in jail for financial crimes in a separate case last month, was brought to the same police station as the judges and charged with bribing them, his lawyer told Slovak media. He refused to testify on Wednesday and denies having any involvement in the murder of Kuciak and Kusnirova.

Prosecutors did not name the accused, but Slovak media said they include influential figures including former deputy justice minister Monika Jankovska, who was seen being escorted into the police station, and a vice-president of Slovakia’s supreme court.

Slovak media quoted Ms Jankovska’s lawyer as saying she faced up to 10 years in jail for alleged corruption and bribery, and that she denied the allegations.

Ms Jankovska, who is also a judge, resigned from the justice ministry last September after police ordered her to hand over her mobile phone to allow them to investigate messages allegedly linking her to Kocner. After breaking the encryption on Kocner’s phone, prosecutors said they found communication with “representatives of state bodies and the justice system”.

In one leaked message that was allegedly sent from Kocner to another suspect in the Kuciak murder, the businessman reportedly described Ms Jankovska as his “monkey” in the justice ministry. She denied all wrongdoing at the time.

The killings triggered major protests in Slovakia to demand an end to corruption and impunity, prompting then prime minister Robert Fico to resign.

He remains leader of the Smer party, which still governs Slovakia but is now preparing to go into opposition after losing parliamentary elections last month.

“If someone breaks the law then they will face all the measures stipulated by our laws, and there will be no exceptions,” said Slovak prime minister and Smer member Peter Pellegrini, who was criticised last year for not sacking Ms Jankovska when she came under police scrutiny.

“I welcome the fact that law enforcement agencies continue to pursue the aims that we spoke of while in government, of bringing everyone to justice regardless of who they are,” he added.