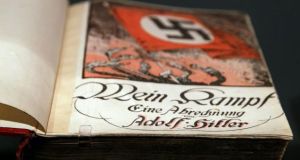 An Italian newspaper has been criticised for distributing free copies of an annotated version of Hitler’s Mein Kampf with a paid supplement to Saturday’s edition.

Prime Minister Matteo Renzi said on Twitter that Il Giornale’s decision to give away the copies of the Nazi leader’s political treatise was “squalid” and expressed solidarity with Italy’s Jewish community.

Efraim Zuroff, director of the Israeli office of the Simon Wiesenthal Center, was quoted as telling Corriere della Sera it was unprecedented for a newspaper to use Mein Kampf to boost sales, while the ANSA news agency quoted Israeli Embassy sources as expressing surprise.

But Il Giornale, a centre-right daily owned by the family of former premier Silvio Berlusconi, said the decision to distribute the edition of the text, which includes critical notes by an Italian historian, aimed “to study what is evil to avoid its return.”

Acknowledging the controversy in an editorial, editor-in-chief Alessandro Sallusti said nobody could suspect the move to be an apology for Nazism and the global Jewish conspiracy posited in the book written between 1924 and 1926.

“The concerns of our friends of the Italian Jewish community, who always have and always will see us by their side ... deserve all our respect,” Mr Sallusti wrote.

Il Giornale on Saturday started selling an eight-volume history of the Third Reich, with the annotated copy of Mein Kampf free for readers who buy the first volume.

A 70-year copyright on Hitler’s book held by the state of Bavaria expired at the end of 2015, prompting Munich’s Institute for Contemporary History to re-issue it as an annotated version earlier this year in an effort “to thoroughly deconstruct Hitler’s propaganda”.