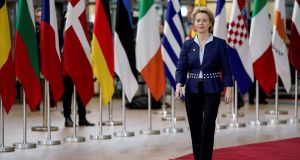 Irish MEPs in Brussels of different political stripes have joined together to demand answers from European Commission president Ursula von der Leyen over the blunder in which the sensitive article 16 of the Northern Ireland Protocol was used last week.

Though hastily reversed before the regulation was finalised, the mistake has destabilised new arrangements for the North designed to reconcile Brexit with the need for an open land border just weeks into their implementation.

“The commission’s triggering of article 16 has damaged relations on the island of Ireland and undermined the security of its people,” the open letter wrote.

“This act was a further and serious blow to the Commission’s credibility, one which points to a wider breakdown in communication between the Commission and democratically elected Member State governments.”

“We need answers from Ursula von der Leyen,” the MEPs added. The Commission resident is expected to take questions in the European Parliament next week.

Separately, Mr Kelleher issued a statement calling on von der Leyen to make a statement on whether the Commission’s use of article 16 followed a request to do so from “any member state or government minister from a member state”.

“Rumours are circulating across Brussels that the decision to invoke article 16 was made following requests from a Member State government. What we need now is complete honesty and transparency from President von der Leyen,” he wrote.

Asked to clarify the rumours referred to, Mr Kelleher said: “What I’m asking is: who instigated the concept of introducing article 16?”

“Some member states called for export controls. Did it go beyond that?” he told the Irish Times.

Article 16, which allows for “temporary safeguard measures” to be taken that go against the rules of Northern Ireland’s special arrangements in cases of “serious economic, societal or environmental difficulties”, has been a rallying call for opponents of the Protocol who present it as a way of overriding Irish Sea checks.

It was cited in an initial version of a regulation introduced last Friday by the Commission that created controls on vaccine exports, in a bid to stop Northern Ireland being used as a backdoor for restricted deliveries to Britain.

The Commission quickly backtracked after an outcry from Dublin. Dr von der Leyen told MEPs she took “full responsibility” for the affair in closed-door talks this week. The article was added to the regulation as drafts were being worked up on Friday.

Both France and Germany had called for export controls in the wake of a bitter row between the EU and pharmaceutical company AstraZeneca, which drastically cut its delivery forecasts to the bloc last month. The controls allow national governments to refuse permission for vaccines to be exported from their borders if they are deemed to have been promised to the EU in purchase contracts.