In Dominic Ongwen’s home village, many see a victim more than a perpetrator 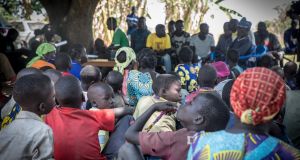 Young boys listen to a radio broadcasting the verdict in the ruling against Dominic Ongwen, a former LRA commander, in his home village of Coorom, northern Uganda. Photograph: Sally Hayden

There was almost total silence as a single radio set broadcast 61 guilty verdicts of war crimes and crimes against humanity to Dominic Ongwen’s family and former neighbours. About 150 of them sat outside on plastic chairs, wooden benches or mats, under trees in Coorom, a village in northern Uganda, listening for his fate.

A judge in The Hague, thousands of kilometres away, read out the ruling against the former child abductee turned-Lord’s Resistance Army commander.

After decades of conflict, Ongwen’s prosecution has become the single international symbol of justice in this lengthy war, but many Ugandans argue it should never have happened.

Across this region, between the late 1980s and mid 2000s, tens of thousands of children were kidnapped and forced to become child soldiers in the LRA, a rebel group led by warlord and self-professed spiritualist Joseph Kony. Those who eventually defected were generally granted amnesty and could attempt to live a normal life again. Methods of traditional justice have been employed, particularly a ceremony called Mato Oput, which can involve confessing wrongdoing, paying compensation, and apologising to those who are hurt.

Ongwen is the exception. Though he was abducted as a child, he was one of five LRA commanders indicted by the International Criminal Court in 2005. In Thursday’s decision, the judges ruled that he was not acting under duress and should be responsible for any crimes he committed after turning 18.

“He was not a puppet on a string,” said presiding judge Bertram Schmitt.

A significant number of northern Ugandans object to the ICC trial, saying it is political, while arguing that Ongwen was a victim too. Others say it is a waste of money, which would be better spent supporting victims to restart their lives.

Unsurprisingly, Ongwen’s family agreed. “The government should be charged in the ICC because they failed to take care of him,” said Joe Kakanyero (48), a cousin of Ongwen’s who said he was kidnapped at the same time and spent five years in the LRA.

He blamed the government for not protecting children and for treating them as combatants from the time they were forcibly recruited.

“It was [President Yoweri] Museveni’s responsibility to take care of the civilians. When rebels abduct you do they think they teach you good manners?” asked Kakanyero. “[The judges] know nothing about these things, they haven’t passed through suffering.”

Cecelia Ladu, an aunt who said she acted as a mother to Ongwen after his own was killed, still remembers him as a “very nice boy”.

“I listened [to the verdict] but didn’t understand [it] very well,” she told me. “I really feel very bad.” She said her only wish now is to be allowed to visit him in Europe.

Ongwen’s brother, 28-year-old Johnson David Onekalit, wasn’t able to afford the cost of transport to get to a public screening of the ruling. Instead, he sat by the radio, which cut out regularly because of connection problems and ad breaks. In advance, he told me he was still hoping Ongwen would be released and could come home.

“I feel a lot of pain,” he said afterwards, while worrying about the financial cost of being responsible for Ongwen’s children, and the larger family, if his brother was locked up for decades. “Now it looks like Ongwen is guilty. At first we didn’t know.”

In Gulu, a city about 50km from Coorom, locals began gathering for a screening three hours before it began.

Paul Oketta, a 43-year-old, said he had come out of curiosity. “I want to see, I have to make my judgment,” he said.

Near him sat Ange Dorin, a 40-year-old who was kidnapped as a teenager and spent nine years in captivity. She said she wanted Ongwen to be found innocent, as she knows what it is like to follow orders under pain of death.

While the ICC broadcast the ruling on its Facebook page, Ugandans with internet access were still not able to see it, as social media remains blocked nationwide three weeks after the country’s latest presidential election. Museveni, the 76-year-old former rebel fighter who has been in power since 1986, won a sixth term even as he was accused of human rights abuses and rigging.

His main opponent, musician Bobi Wine, has made his own submission to the ICC calling for Museveni to be prosecuted for crimes against humanity, citing killings of civilians and opposition supporters in the months before the vote.

While northern Uganda is peaceful now, the LRA is still active in eastern Central African Republic and northern Democratic Republic of the Congo. Invisible Children, the organisation which produced the viral Kony 2012 video about the group, say at least 138 children and youths have been abducted since January 2018, with about 108 still missing and presumed to be in captivity.