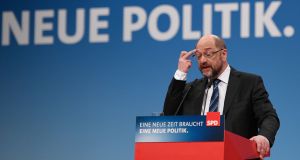 Martin Schulz: has announced he will abandon his bid to become foreign minister in a new coalition government with chancellor Angela Merkel. Photograph: Sascha Schuermann/AFP/Getty

Three days after agreeing a coalition deal to end months of standstill in Berlin, German political leaders are skidding into gubu territory.

Reports of an unprecedented mutiny against chancellor Angela Merkel were eclipsed on Friday afternoon by a grotesque twist of fate for Social Democrat (SPD) leader Martin Schulz.

The 62 year old threw in the towel after a growing backlash against him and his plan to become Germany’s next foreign minister.

Senior leaders feared a personalised row with the popular incumbent, Sigmar Gabriel, would derail their efforts to steer the coalition agreement over the finish line. After a flood of over 6,000 angry mails in recent days, party grandees leaned on Mr Schulz to go. On Friday afternoon, he confirmed he would “forgo joining the federal government”.

“I hope sincerely that this will end the personnel debates within the SPD,” he added. “It’s appropriate that my personal ambitions should take a back seat to the interests of the party.”

After 23 years in the European Parliament, Mr Schulz parachuted into German domestic politics last March as SPD leader and challenger to Dr Merkel. But initial euphoria soon fizzled and, in September’s election, he pulled in a disastrous 20.5 per cent for the SPD – its worst result since 1949.

His credibility was dented after, despite previous promises to the contrary, he vowed to lead his party into a third grand coalition with the CDU/CSU – and to sit at Dr Merkel’s cabinet table.

Outrage continued to build with reports that the final, all-night round of coalition talks was not held up by policy disputes but a 10-hour round of horse-trading over ministerial portfolios – including the foreign ministry for Mr Schulz.

Friday’s announcement ends an extraordinary week for the 153-year-old party after, two days ago, Mr Schulz proposed Andrea Nahles (47) as his successor and first woman leader.

She thanked Mr Schulz for his “remarkable” selflessness on Friday and now begins a campaign to convince over 460,000 ambivalent rank-and-file members to back a third grand coalition with Dr Merkel’s CDU/CSU camp. Three weeks of postal voting lie ahead but, even if the March 2nd vote is positive, further gubu upsets cannot be ruled out on Germany’s bumpy road to a new government.

After a dozen unchallenged years, Dr Merkel is coming under unprecedented pressure from senior CDU figures who accuse her of putting her own political survival as chancellor before the party’s interests when she pulled together a coalition agreement this week after four months and two attempts.

CDU conservatives in particular are livid that, to seal the deal, Dr Merkel sacrificed the powerful foreign, finance and labour ministries – and agreed to a €46 billion spending programme as well as potentially costly euro reforms.

The powerful Bild tabloid, sensing blood in the water, has exhumed old rivals to stir up unrest against the German leader.

On Friday, in the role of Banquo’s ghost: Friedrich Merz, once Dr Merkel’s popular deputy until she disposed of a potential rival. “If the party accepts this humiliation, then they have given themselves up,” said Mr Merz, who swapped politics for law.

Cautiously, CDU senior figures are coming out of the long grass. The most daring so far is Daniel Günther, the 44-year-old premier in the northern state of Schleswig-Holstein. In a faint echo of Dr Merkel’s 1999 attack on Helmut Kohl, he suggested his party had grown too reliant on its leader of 18 years.

“We have always just looked to Angela Merkel and given her all the work,” he said. “But building the party profile is not the job of one person but for the whole party.”