German nurse sentenced to life for killing at least 30 patients

Niels H, who injected patients with medicine to induce cardiac arrest, may have killed 200 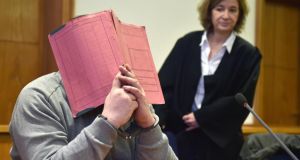 Former nurse, only identified as Niels H, hides his face behind a folder next to his lawyer Ulrike Baumann at the local court in Oldenburg, Germany. Photograph: Carmen Jaspersen/AP Photo/dpa

Germany has a new record-breaking serial killer: a nurse sentenced to life imprisonment yesterday after he admitted killing at least 30 patients.

Authorities fear the 38-year-old man, identified only as Niels H, may be responsible for as many as 200 deaths during his six-year nursing career.

The case in the Lower Saxon town of Oldenburg has transfixed Germany, not for the nurse’s actions – but his motive. During his trial, on two cases each of murder and grevious bodily harm, the nurse said he injected as many as 90 patients with a heart medication causing cardiac arrest, so that he could then rush to reanimate them. The nurse said he was addicted to the subsequent praise from his colleagues, who dubbed him “Rescue Rambo”.

But, as his addiction to praise grew, so did the his co-workers’ suspicions. Some viewed him as a ward “jinx” and refused to work shifts with him, noticing a pattern between his presence and unexplained patient deaths. Rather than investigate their suspicions, however, hospital authorities gave the nurse an excellent reference and, after four years, encouraged him to move on in 2003. In a second hospital he continued as before until 2005, when a colleague caught him in the act of injecting a patient with unprescribed heart medication. The patient survived and the nurse went on trial and was jailed in 2008 for attempted murder.

During this latest trial – on two further counts each of murder and grevious bodily harm – the nurse admitted he had lost count of how many patients he had injected. He told forensic investigator Konstantin Karyofilis he’d caused medical emergencies not to kill the patients, but to show his colleagues how talented he was at saving lives. “He was addicted to this feeling of having done something good, a feeling that sometimes lasted days,” said Mr Karyofilis.

The prospect of a serial killer nurse, undiscovered for six years in two different hospitals, has put pressure on state prosecutors in Oldenburg. Families of patients who died in the nurse’s care accuse investigators of ignoring their complaints about their loved ones’ unexplained sudden deaths. Legal proceedings have been initiated against two former state prosecutors and an end-to-end investigation of the ex-nurse’s career has begun. At least 100 bodies of former patients are likely to be exhumed and examined for traces of the heart medication. Cause of death in another 130 cases may never be clarified, however, as the victims’ remains were cremated.