France faces a reckoning over the travails of its civil service

Paris Letter: The state’s 5.5m fonctionnaires are the butt of jokes and economic concerns 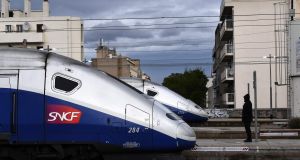 A man waits on a train platform in Marseille beside a train belonging to the state-owned railway company SNCF. File photograph: Anne-Christine Poujoulat/AFP/Getty Images

The playwright Georges Courteline made French civil servants the object of ridicule in his 1893 play Messieurs les ronds-de-cuir, named after the round leather cushions that bureaucrats sat on.

More than a century later, France’s 5.5 million state-employed fonctionnaires comprise one-fifth of the country’s workforce, and they are still the butt of jokes. When a Socialist government reduced the legal working week back in 2000, wags joked that civil servants would have to work more to reach the requisite 35 hours.

“People are wicked,” the much-loved late comedian Coluche said in a comedy routine. “They say the police are recruiting all the alcoholics who were rejected by the SNCF [railway] and PTT [post and telecommunications].” The audience always roared with laughter.

French civil servants work shorter hours and enjoy longer holidays, earlier retirement and more generous pensions than their counterparts in the private sector. Most of all, they enjoy job security. A tenured fonctionnaire cannot be fired.

The words “fonction publique” conjure up fruitless supplications to ill-tempered bureaucrats who would rather take their coffee break than help one circumvent incomprehensible phone menus and websites.

The SNCF state-owned railway is a prime example. Interlocutors and websites for it have burgeoned, but your train will probably arrive late. Good luck getting reimbursed for an unused ticket. A recent report by the state auditor says the SNCF costs every French household €905 annually, whether they take the train or not.

Conservative and centrist presidential candidates have routinely promised to streamline the public service, yet no president has dared cut back significantly, for fear of street demonstrations and driving up jobless figures.

There are good economic reasons to cut back. The civil service swallows up one-quarter of French GDP. Social spending consumes another third. According to the Organisation for Economic Co-operation and Development, 56.8 per cent of the French economy is in the state sector, the highest proportion in the developed world.

The problem is knowing where to cut. The police force is particularly hard-pressed, since the jihadist attacks of 2015-2016.

Under his Public Action Plan 2022, prime minister Édouard Philippe wrote to every government ministry asking for cutbacks. Virtually all replied that they were already cut to the bone, and that they were the indispensable exception.

School teachers are among the most criticised civil servants. They are poorly paid and undermotivated. Pay them more, but make them work harder, say angry parents. This month, 19 families in Seine-Saint-Denis, north of Paris, filed a lawsuit against the state for “harm done to our children”. The students in question had missed an average of 178 hours of courses due to absent teachers during the 2018-2019 school year.

Several high-ranking civil servants told me the administration must concentrate on the state’s regalian duties – defence, justice, law and order – and give up more peripheral functions. For example, they asked, should all doctors and nurses in public hospitals enjoy the status of civil servants? Does the state really need multiple organisations responsible for promoting French business abroad? And should the nanny state rescue citizens who get lost hiking in the Himalayas, when other countries do not?

France redistributes more wealth than most countries, which is arguably a good thing. But it has a huge cost. French citizens enjoy free education, almost free medical care, and, in many cases, subsidised housing. Once people have grown accustomed to such advantages, it’s impossible to take them back.

President Emmanuel Macron looks unlikely to keep his campaign promise to shed 120,000 civil servants’ jobs during his five-year term. He seems to be reforming the civil service by stealth. A new law on the transformation of the public service was passed on August 9th, when the entire country was away on holiday.

Under the pretext of “diversifying the recruitment pool” it allows the state to shift employees from tenured status to private contracts. This is now the case for close to 20 per cent of the government workforce. Henceforth, state workers may be given “specific missions” lasting one to six years, but without entitlement to permanent employment. Contracts of less than 12 months will carry a “precariousness bonus”.