Presidential candidate said to have accepted suits worth €13,000 at Paris shop 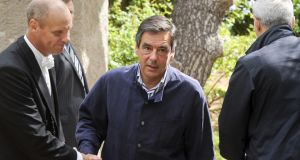 François Fillon: once considered the favourite to win the presidency, Mr Fillon has been badly damaged by a financial scandal. Photograph: Gerard Julien/AFP/Getty Images

François Fillon’s party has apologised for tweeting a caricature of Emmanuel Macron, his main rival in the race to be France’s next president, that Mr Fillon himself admitted was anti-Semitic, adding to a row of controversies around his campaign.

Another development on Sunday was a report in the French weekly newspaper Journal du Dimanche saying an anonymous person had given Mr Fillon two suits costing €13,000 at a chic Paris boutique.

“A friend gave me suits as a present in February. So what?” Mr Fillon said in an interview with French news daily Les Echos. France sets a limit of €4,600 that any individual can donate to all candidates during an election campaign.

The controversy came the same weekend that Mr Fillon’s conservative The Republicans tweeted an image of the independent centrist Macron with a hooked nose, wearing a top hat and carrying a red sickle with which he was cutting a cigar. The image resembled anti-Semitic propaganda from the second World War when France’s Vichy government collaborated with the Nazis and their deportation and extermination of Jews.

Mr Macron is not Jewish but the cartoon appeared to refer to his past as a Rothschild investment banker.

A day after the tweet was posted – and subsequently deleted – Mr Fillon called the image “unacceptable” and said he understood the outrage it had caused “because it evoked the images of a dark period of our history and exploited an ideology that I have always fought against. “Politics is tough but it must remain dignified. I will not tolerate my party using caricatures that use the themes of anti-Semitic propaganda,” Mr Fillon tweeted, saying he had demanded his party chief apologise and sanction the people responsible.

A spokeswoman for Mr Macron declined to comment. He was due to appear on television at 8pm. Mr Fillon, once considered the favourite to win the presidency, has been badly damaged by a financial scandal and now lies in third place behind Macron and far-right candidate Marine Le Pen in the April 23th first round. Only the top two candidates will go through to a run-off on May 7th. – (Reuters)