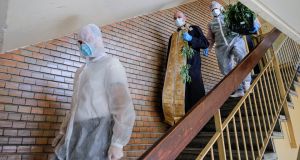 Millions of people across eastern Europe and the Balkans are being urged to stay away from church and large gatherings when they mark Orthodox Easter this weekend, as some clerics gripe about rules imposed to fight the coronavirus outbreak.

Leaders across the region are telling believers to forgo church services, family meals and other traditions amid concerns that a post-Easter surge in Covid-19 cases could overwhelm underfunded healthcare systems.

Not all senior clerics support their governments’ instructions, however, fuelling fears that significant numbers of people may ignore guidelines in countries where the Orthodox Church is still influential and trust in most state officials is low.

He was speaking after Romanian interior minister Marcel Vela agreed with Patriarch Daniel, the head of the country’s Orthodox church, that priests, volunteers and police officers would distribute consecrated bread and carry a “holy flame” from which people could light candles outside their apartment blocks.

The government now says police officers will not take part, but insists the “bread and light” will be taken house-to-house on Holy Saturday evening by clerics working with up to five volunteers wearing protective equipment.

In Romania and across the region, most senior Orthodox priests say services will take place behind closed doors over Easter, but social media posts and local news reports suggest some churches are still inviting people to attend Mass.

Some senior clerics of the Moscow Patriarchate in Ukraine initially dismissed the threat posed by the pandemic, but their vast Kiev Pechersk Lavra monastery was quarantined this week after about 100 cases of Covid-19 were confirmed among monks, students and staff, including two that proved fatal.

“This whole situation demonstrates that your nationality, gender or religion are not important to coronavirus,” said Ukrainian president Volodymyr Zelenskiy.

“It demonstrates that you cannot have a careless attitude towards the disease. Therefore, once again I urge you to stay home on the Easter holidays.”

Serbia and North Macedonia have announced a full Easter lockdown from Friday afternoon until Tuesday morning, despite calls from the Serbian Orthodox Church for people to be allowed to hear Mass in the open air outside churches.

“I will beg the patriarch on my knees to reconsider this request,” said Serbian president Aleksandar Vucic, “but we will certainly not arrest priests.”

The Russian Orthodox Church was initially reluctant to close churches and not all its clerics support Patriarch Kirill’s subsequent call for people to pray at home during the pandemic.

“Here in church we get infected with eternal life, not death,” Bishop Methodius of Kamensky and Kamyshlovsky in the Urals region told parishioners last Sunday. “In church one must not be afraid of death.”