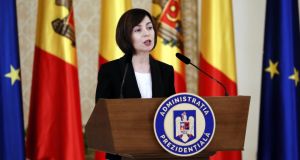 Moldova’s prime minister Maia Sandu: ‘We are not asking for advance payments. We are asking for support for our democratic transformation.’ Photograph: Robert Ghement/EPA

The European Union has promised political and financial support to the new government of Moldova, as it seeks to transform the poor and corruption-riddled country following a dramatic change of power.

Parliament approved her cabinet but for several days the outgoing Democratic-led government refused to step down, leading to a tense power struggle and fuelling fears for stability and security in the country wedged between Ukraine and Romania.

Ms Sandu, a former education minister and adviser to the World Bank, thanked the EU on Wednesday for its “principled position, which played a key role in convincing the previous government to leave peacefully and not to try to cling onto power through brute force and repression”.

“Our institutions and people’s trust in them have been badly damaged by mismanagement, foul play, corruption, state-sponsored smuggling and fraud. Today Moldova needs a restart,” she said while in Brussels for talks with senior EU and Nato officials.

“Today we are not asking for advance payments. We are asking for support for our democratic transformation. I am here to restore Moldova’s fully fledged co-operation with the European Union, frozen because of previous corruption and fraud.”

The European Parliament called Moldova “a state captured by oligarchic interests” last year, and the EU froze funding to the country after its courts used a technicality to stop anti-corruption campaigner Andrei Nastase – now interior minister – becoming the mayor of Chisinau, the nation’s capital.

In the biggest of many corruption scandals, Moldova is still to solve or recoup money from the theft in 2014 of $1 billion (€886,950,000) from three of its banks – a sum equivalent to about one-eighth of its gross domestic product.

“The Republic of Moldova can count on European Union support both politically and – probably even more importantly now – financially, to ensure sufficient resources are available for the implementation of these fundamental reforms,” said EU enlargement commissioner Johannes Hahn.

Numerous prominent officials with alleged allegiance to Mr Plahotniuc and the Democrats have resigned or been sacked since the new government took power, and all six judges on Moldova’s constitutional court have stepped down.

Mr Plahotniuc left the country when his party conceded defeat and his whereabouts are unknown. Moldovan media reported this week that prosecutors have seized several buildings owned by one of his firms as part of a money-laundering investigation.

The tycoon denies all wrongdoing and has pledged to return to Moldova to provide strong political opposition to the new government and pro-Russian president Igor Dodon.