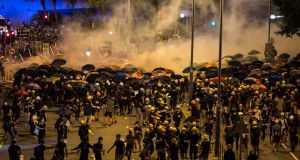 China lodged an official protest with the UK on Wednesday and hit out at foreign secretary Jeremy Hunt’s comments on the recent Hong Kong protests, saying he “seems to be fantasising in the faded glory of British colonialism” and was delusional and obsessed with lecturing others.

During a Conservative Party leadership debate on Monday, Mr Hunt had warned of “serious consequences” if China did not honour the “one country, two systems” formula that enshrines the basic freedoms of the people of Hong Kong for 50 years after the 1997 handover.

China lodged “stern representations” with Britain over Mr Hunt’s comments, foreign ministry spokesman Geng Shuang said in Beijing on Wednesday, adding “He seems to be fantasising in the faded glory of British colonialism” and “is obsessed with lecturing others”.

Calling him “shameless” and “delusional”, Mr Geng said “I want to remind [Mr] Hunt that Hong Kong had no democracy at all and Hong Kong people even did not have the right to protest on the street during the colonial era.”

Boris Johnson, the other candidate in the Tory leadership battle, also urged China to not cast aside the agreement signed with Britain and told Reuters in an interview on Wednesday he would back Hong Kong “every inch of the way”.

After weeks of mass-scale protests against a proposed extradition Bill that could see Hong Kong people face trial in mainland China, anger boiled over and the city descended into chaos on Monday on the 22nd anniversary of the city’s handover to China.

In unprecedented scenes for the financial hub that were broadcast around the globe, hundreds of protesters stormed the legislative council, sprayed anti-government graffiti on the walls and furniture, smashed portraits of politicians, defaced the city’s emblem and draped a British colonial era flag over the chamber’s podium.

Later the protesters said they had displayed the flag to remind the UK about its legal obligations under the handover agreement.

Beijing said there would be “zero tolerance” shown to the perpetrators and urged the city’s officials to bring them to justice.

In what appeared to be a thinly veiled warning, the morning after the mob ran amok China’s People’s Liberation Army official newspaper ran a report and a series of photographs of recent drills in its Hong Kong garrison – which is only a few hundred metres from the legislature – involving ground, naval and aerial forces “to prepare against and resist aggression” and “to raise combat abilities in emergency dispatches”.

The legislature is cordoned off as a crime scene, and police say they are gathering forensic evidence and will “resolutely pursue the protesters for their illegal and violent acts”.

Eight people were arrested on Tuesday on suspicion of a range of related online crimes, including releasing police officers’ personal information online, hate speech and making death threats against officers and their children.

The online attacks started after clashes on June 12th when police used rubber bullets, tear gas and batons to push back protesters. Human rights groups and protesters say there is ample video evidence to show that police used excessive force on that evening and are calling for an independent inquiry into their handling of the rally.