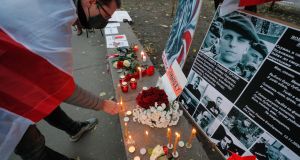 Belarusians living in Ukraine along with their supporters and Ukrainian activists lay flowers and candles at a symbolic memorial for Roman Bondarenko in Kiev. Photograph: Sergey Dolzhenko/EPA

Thousands of Belarusians have taken to the streets to denounce the country’s autocratic president Alexander Lukashenko and to honour a pro-democracy protester who was allegedly beaten to death by police officers or other supporters of the regime.

Witnesses to Wednesday night’s attack say Roman Bondarenko (31) asked a group of masked men why they were removing ribbons in the opposition’s red-and-white colours from a courtyard in the Belarusian capital, Minsk. The men set upon him and forced him into a waiting van. About 90 minutes later he was taken from a police station to hospital, where he died on Thursday from severe head injuries.

Mr Lukashenko cited a police report on Friday saying Mr Bondarenko had been hurt in a street fight while drunk. However, a doctor from the hospital where he was treated told independent media that no alcohol was found in his blood.

The biggest protests of Mr Lukashenko’s 26-year rule erupted after he claimed victory in August elections that the European Union, United States and supporters of his chief rival, Svetlana Tikhanovskaya, say were blatantly rigged.

Belarusian security services have tried to suppress the protests with vicious beatings and arbitrary arrests. Several demonstrators have died during the crackdown, hundreds have been injured and more than 15,000 detained, promoting the EU and US to impose sanctions on senior members of the regime.

Mr Lukashenko accuses the West of fomenting unrest and he has turned to Russia for support, while allowing his uniformed and plain-clothes police and members of the KGB security services to act with impunity. He also called recently for armed militias of pro-government volunteers to patrol the streets.

“This is an outrageous and shameful result of the actions by the Belarusian authorities, who have not only directly and violently carried out repression of their own population, but also created an environment whereby such lawless, violent acts can take place,” EU spokesman Peter Stano said of Mr Bondarenko’s death.

“The European Union has already imposed sanctions on 55 individuals responsible for violent repression and intimidation, and stands ready to impose additional sanctions.”

People carrying candles and flowers gathered on Thursday evening in the courtyard where the attack took place and chanted “We won’t forget or forgive”. On Friday, people in Minsk and other towns and cities joined hands to form human chains and held photos of Mr Bondarenko, while drivers slowed traffic to a crawl and sounded their horns.

Protesters plan a “march of the brave” on Sunday, in a continuation of weekly rallies that have sometimes drawn more than 100,000 demonstrators: “No matter how frightening it is to confront the bandits who stole our election and imposed terror, it is far more frightening to live under banditry,” the organisers said.

The next flashpoint in the rivalry could be Moldova, where in Sunday’s presidential election run-off Kremlin-endorsed incumbent Igor Dodon faces a strong challenge from pro-EU reformist Maia Sandu, who narrowly won the first round on an anti-corruption campaign.