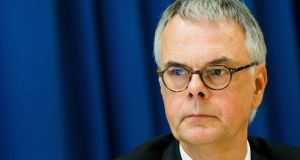 Cologne’s police chief has been suspended indefinitely a week after his force failed to prevent gangs of men, including some asylum seekers, sexually assaulting scores of women celebrating the new year.

The anti-immigrant Pegida group from the eastern city of Dresden is holding a demonstration in Cologne on Saturday, hoping to channel frustration and fears sparked by the attacks to establish a second foothold in western Germany.

Pre-empting that gathering, a Swiss artist protested naked in minus-four-degree temperatures before Cologne Cathedral, scene of last week’s attacks, carrying a sign reading: “Respect us! We are not fair game.”

“I stand for women’s freedom to move freely, for things we’ve achieved in the past 50 years and for women’s emancipation,” said Milo Moiré. “Women should behave as normal and not allow themselves to be intimidated. It’s the job of politicians to take steps to ensure this never happens again.”

More than 200 criminal complaints have been filed to date by women in Cologne who say they were robbed, as well as physically and sexually assaulted by gangs of men on New Year’s Eve.

Among the 31 men police suspect of involvement in the attacks are citizens of Morocco, Syria and the US. Eight of the men are reportedly asylum seekers and, according to Cologne’s Express newspaper, several smartphones stolen during the attacks have been traced to asylum homes in the city.

Two men detained by police were released without charge on Friday, returning attention to the role of the Cologne police chief, Wolfgang Albers, in the chaos and its aftermath.

Early on New Year’s Day, his office issued a statement noting a “calm atmosphere” overnight in the city, with no reference to the attacks.

Mr Albers later denied that his officers were overwhelmed by the violence and said he had no knowledge of asylum seekers being involved in the attacks. Both claims were contradicted by officers on duty in leaked reports.

That move was an attempt to buy some time for the police investigation and to calm the public mood ahead of Saturday’s Pegida march and the upcoming pre-Lenten carnival parade that normally attracts more than one million people to Cologne.

“My decision now is important because public trust in the Cologne police has to be restored,” said Mr Jäger. “People want to know, rightly, what happened, who the perpetrators are and how such events can be prevented in future.”

Hours before Mr Albers’s departure, Cologne mayor Henriette Reker accused the police chief of concealing from her “politically sensitive” information about the attacks, which she later learned through the media.

The attacks have caused shock throughout Germany’s political system, increasing the pressure on Chancellor Angela Merkel to shift course in relation to the refugee crisis.

They have also fuelled an emotional debate about the difficulties of deporting from Germany asylum seekers who commit crimes. Germany’s criminal code allows authorities to deport a non-national seeking asylum if they are given a three-year sentence for a crime.

However, they cannot be returned to their home country if they are at risk, in which case authorities must find another country willing to accept the person.

The Cologne attacks appear to have hardened German public opinion on the refugee crisis.

Days after Sweden introduced ID checks at its borders, some 57 per cent of Germans now want Berlin to follow suit, a rise of 12 percentage points since September.

But a poll for the ARD public broadcaster showed support for a migration cap down 11 points since December to 61 per cent.