More than 6m Germans and 750,000 Austrians tuned in to ‘Between Heaven and Here’ 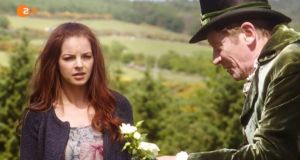 Scene from Between Heaven and Here, written by Cecelia Ahern. The reaction to Sunday’s screening was overwhelmingly positive

The closest word the German language has for blarney is Schmus. And there was Schmus galore on offer last Sunday evening on German public broadcaster ZDF.

It was shown in the popular Sunday evening slot Herzkino – heart cinema – a kind of collective bubble bath for a nation’s tired brains. For 90 minutes Germans could luxuriate in Ahern’s whimsical love story set in lush green landscapes, cosy pubs, mossy graveyards and . . . wait, is that a leprechaun picking foxgloves during the opening credits?

Many questions
It was just one of many questions facing our heroine Amelia Theresa, an auburn-haired Munich bookseller who discovers that her parents adopted her at birth from Ireland.

Along the way Amelia swaps Frederick, her loser German fiance, for Irish man Bobby O’Brien, a free-spirited, tweed-sporting, tea-slurping private detective and part-time musician. In the final reel, the leprechaun is revealed to have been the ghost of someone’s uncle Billy.

Ahern is a big name in German popular fiction, contributing about half of her 16 million sales, and reaction to the movie was overwhelmingly positive.

In a post-screening online chat with the author, one viewer wrote: “Thank you for this wonderful film. I have all your books, when I start them I cannot stop dreaming my way into your world.”

Ahern, clearly bowled over by the response, felt compelled to correct one misconception. “No, I do not believe in leprechauns,” she wrote.

First formulated by writer Heinrich Böll in his 1957 Irish Journal, the balsam’s active ingredient is the proposition: “We Germans sold our hopelessly romantic souls to the Nazis, so let’s adopt an Irish soul instead.”

Amelia’s journey, from up-tight German bookseller to fun-loving Irish cailín, is completed when she overcomes her Teutonic shyness in a pub to sing a song, sadly not “I’ve been to paradise but I’ve never been to me”.

Ahern’s film, like her books, may not be to everyone’s taste. But, like Mrs Brown’s Boys and Ryanair, her success is an impressive and valuable Irish export. The television film, shot last summer in Ireland, was a boost for the Irish film industry.

This summer, meanwhile, Ireland’s tourism industry can look forward to a stampede of German Ahern fans.

Indeed the film went down so well that, in three weeks, ZDF is rolling out an Ahern encore: My Whole, Half Life.

To complete her German-Irish trilogy how about a story of a jobless Irish lass, Molly Bloom, who moves to Berlin for work, wins the heart of the flinty local finance minister and convinces him to green-light debt relief for her homeland?