Sebastian Kurz on track to be next leader, but his party may seek coalition with far right 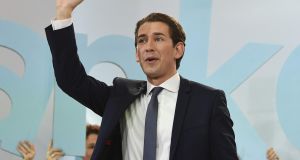 Young conservative star Sebastian Kurz is on track to become Austria’s next leader after an election on Sunday, but his party is far short of a majority and likely to seek a coalition with the resurgent far right.

Mr Kurz, the foreign minister, who is just 31, managed to propel his People’s Party to first place by taking a hard line on immigration that left little space between it and the far-right Freedom Party (FPO).

Both parties increased their share of the vote from the last parliamentary election in 2013, projections showed, marking a sharp shift to the right in the wake of Europe’s migration crisis. Chancellor Christian Kern’s Social Democrats were in a close race with the FPO for second place.

“I am truly overwhelmed,” Mr Kurz told cheering supporters at an election party after polls closed. “We made the impossible possible. Thank you very much for your commitment and this historic success.”

He was less effusive about his coalition plans. He repeatedly declined to say which option he favoured, adding that he wanted to await the count of postal ballots that will settle the race for second place.

The bulk of those ballots, which are roughly one-sixth of those cast, will be counted on Monday.

“Let’s give it a couple of days. Then we will see what the result really looks like,” Mr Kurz told broadcaster ORF when pressed on what he plans to do. He said he intended to talk to all parties in parliament and did not rule out forming a minority government.

Austria, a wealthy country of 8.7 million people that stretches from Slovakia to Switzerland, was a gateway into Germany for more than 1 million people during the migration crisis that began in 2015. Many of them were fleeing war and poverty in the Middle East and elsewhere.

Austria also took in roughly 1 per cent of its population in asylum seekers in 2015, one of the highest proportions on the continent. Many voters feel the country was overrun.

Mr Kurz’s strategy of focusing on that issue appears to have paid off, despite economic growth on track to be the fastest in six years and falling unemployment touted by Mr Kern, who depicted Mr Kurz as the candidate of the rich.

A projection by pollster SORA showed Mr Kurz’s People’s Party (OVP) winning the election with 31.6 per cent of the vote, based on a count of all non-postal ballots. The OVP’s current coalition partners, Mr Kern’s Social Democrats, were on 26.9 per cent, just ahead of the FPO on 26 per cent.

The projection had a margin of error of 0.7 percentage points, meaning the race for second place was too close to call.

The FPO was short of its record score of 26.9 per cent, achieved in 1999, but still has a good chance of entering government for the first time in more than a decade. The OVP and the Social Democrats are at loggerheads, meaning the FPO is likely to be kingmaker.

FPO leader Heinz-Christian Strache, who has accused Mr Kurz of stealing his party’s ideas, declined to be drawn on his preferred partner.