Albania bunkers down with ideal habitats for bats

Tirana Letter: Construction of cold war shelters killed more than they ever protected 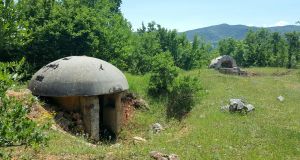 About 21,000 steel and concrete pillboxes were built each year from 1975 until 1983, when the “bunkerisation of Albania” concluded. Photograph: Getty

When the members of the Central Committee of the Party of Labour of Albania agreed in 1971 to build a vast network of concrete bunkers across the country, they probably never imagined that the only creatures for whom the protective structures would ever provide any meaningful shelter were rare species of bats.

Nor, surely, would they have envisioned that less than 50 years later, the bats – and the bunkers with them – would be protected by environmental directives from the European Union, an organisation the once-communist country would be in the process of joining.

But earlier this year the EU decided to open accession talks with Albania – along with North Macedonia – and an annual report adopted last month said the country has already made decisive progress and is close to meeting certain conditions set by the European Council.

It seems a long way from the 1970s, when Albania appeared to have been gripped by a sort of mania for bunker building. About 21,000 steel and concrete pillboxes were built each year from 1975 until 1983, when the “bunkerisation of Albania” concluded. By that time, the country (which is less than half the size of Ireland) boasted no fewer than 170,000 concrete bunkers, or one bunker for every 11 people.

For a few Albania lek, visitors to Tirana can today stroll around Facility 0774, a complex of cold war tunnels and chambers built to withstand a catastrophic attack or invasion. The mega-bunker contained everything a sheltering government would need to conduct its affairs during a nuclear apocalypse: an assembly hall, dormitories and communications rooms, as well as relatively plush apartments for its leaders.

One of the last rooms in Facility 0774, or Bunk’Art, as the museum is now known, contains an EU-funded exhibition on biodiversity. It explains that today bunkers and tunnels recreate the conditions of natural habitats and have provided a sanctuary for bats whose caves have been threatened by quarries, landfill sites and other human activities in Albania.

Bats use the bunkers year-round for mating, hibernation and as migration stops. Of the 32 bat species recorded in Albania, 18 of them were spotted in bunkers. “All the bat species are protected by the Albanian law, in line with the EU habitats directive, and so are their habitats. This is why many of the bunkers and tunnels are protected by law and could be integrated in Natura 2000,” an interpretive panel informs visitors.

The bat exhibition isn’t the only evidence of co-operation between Albania and the EU. Overlooking a roundabout outside the town of Rrogozhinë, in the country’s Western Lowlands region, a massive EU billboard declares in Albanian EVROPA ËSHTË KËTU – “Europe is here”.

Albania declared its independence from the Ottoman empire in 1912. In 1939 it was invaded by Italy and later occupied by Germany. After the second World War, communist partisans took over under the leadership of Enver Hoxha and the country allied itself first with the USSR and then China.

“The Pavillion of Communist Terror” at the National History Museum in Tirana provides a stark image of this post-war period. The exhibition consists mostly of photographs of the bodies of anti-communist activists and some relics such as their jumpers or handcuffs. Very little information is provided in English so it’s hard to figure out exactly what is going on, but it’s clear that a lot of people were shot.

The first multi-party elections were held in March 1991 following mass demonstrations while further unrest precipitated subsequent elections in 1997. The country is now a parliamentary democracy, governed under a constitution passed in 1998.

Albania applied for EU membership in 2009. Today, the bloc is the largest provider of financial assistance to the country, with pre-accession funding in 2014-2020 amounting to €758 million. Albania participates in several EU programmes such as Erasmus+ and Creative Europe as well as being an observer to the EU Fundamental Rights Agency.

None of which is to say that Albania will be an EU member any time soon. The path to membership is a long one and talks on admission will still take about a decade to complete while the country continues to implement reforms to align it more closely with other member states.

As for the bunkers, many of the ones not housing bats have disappeared from the countryside over the past 15 years, reportedly dismantled (ie blown up) by people looking to sell the steel inside them for scrap.

In the end, they possibly killed more people than they protected. As the Bunk’Art museum in Tirana points out, hundreds of soldiers and civilians died in workplace accidents while building the structures: “They are among the victims of communism who are still completely forgotten.”